The Musée des Ursulines de Québec is an art and history museum whose mission is to preserve, exhibit and promote the heritage of a teaching religious order established in Quebec City since 1639.

First female teachers for girls in North America and the first occupants of Quebec City with the Augustine sisters, Jesuits and settlers, the Ursulines of Quebec have a collection whose value far exceeds the story of a religious order in Quebec and Canada.

With their first museum in 1936, the Ursulines revealed a treasure that had never before been shown to the general public. Through interesting summer exhibitions, which were seen through the grills of the monastery’s parlour, the nuns sought to present to Quebec’s population a heritage from a common past.

In 1979, the Museum became the first museum of religious community in Quebec to be accredited by the Department of Cultural Affairs (now Ministry of Culture and Communications.

Today, the Museum offers permanent exhibitions, one dedicated to the mission of educating young women, the other to the history of the building and its archaeological roots.

The Museum offers guided tours, all of which allow participants to explore its exhibitions in greater depth or discover more specifically certain aspects of the history and heritage of the Ursulines of Quebec.

The Musée des Ursulines de Québec is located in a building just outside the walls of the monastery, on the foundations of the house of the community’s benefactress, Madeleine Chauvigny of Peltrie (1603-1671). Over the centuries, the building suits the needs of the monastery and the nuns, erving in turn as a rental property, a boarding school for Native girls, a day school, a teacher training school, a juniorate and a provincialate. The La Peltrie house also hosts famous tenants such as the first bishop of New France, Francois de Montmorency-Laval.

The decor of the Ursulines’ Chapel is recognized as one of the most beautiful carved wood ensembles in all of Quebec. Made by Pierre- Noël Levasseur (1690-1770) from 1726 to 1736, then gilded by the Ursulines from 1736 to 1739, the decor was reinstated in the Chapel when it was reconstructed in 1901.

The paintings, which were acquired around 1820 following the French Revolution, are part of the Desjardins Collection.

In Marie de l’Incarnation Oratory rest the remains of the Blessed Marie of Incarnation (1599-1672) who was beatified in 1980 by Pope John-Paul II who named her The Mother of the Church in Canada.

The museum is accessible to people with reduced mobility.

Web Site of the museum : www.museedesursulines.com 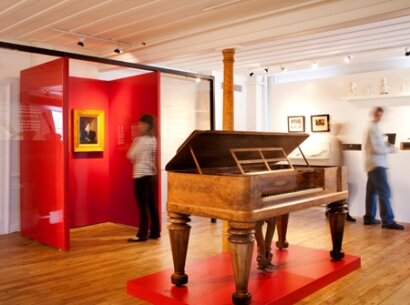