Truth or simulation : What gives authority to a map today?

Why do we trust the results given by a search engine such as Google Maps? What about the mysterious Sandy Island, this island located by Google Maps offshore of Australia that oceanographer have not found yet? What about the maps acquired from a GPS?

Why do we so easily comfortably trust all these map-producing technologies?

The scientific values of a map

In the 17th century, the scientific value of maps is not yet established. It relied on the legitimate knowledge, expertise and competence of the cartographer. Prestigious titles like “King’s Geographer” or a direct filial bond with a respected family of cartographers were ways to negotiate essential trust between the producer and user of maps.

The exponential evolution of electronic imagery is producing disconcerting virtual representations. Simulation is no longer that of a territory, a referential being or substance, it is the generation of models of a reality with no origin nor concrete existence: the hyper reality. Henceforth, it is the map that precedes the territory that it generates. How can you recognize reality from virtual, untangled truth from false?

Of Land and Heavens

Astronomy is essential to the measure of time and space. It is useful for navigation and the construction of maps. On land, as well as at sea, the height of the Sun or Polaris above the horizon was used to determine latitude, i. e. our observation of the moons of Jupiter helped to determine the longitude of our position on an East-West axis. It is with these two measurements, the latitude and the longitude, that the Cartesian grid of a map is created and accurate.

Until the second half of the 18th Century, the calculation of the longitude at sea, was made from astronomical and empirical complicated observations. Since the invention of the mariner’s clock during the third quarter of the century, longitude is found by comparing the gap between the time at the 0 Meridian with the actual time and the location, expressed in degrees, minutes and seconds, East or West of the 0 Meridian. 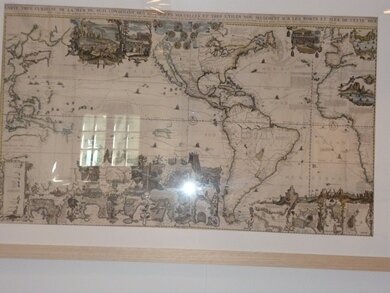 For more than 2000 years, geography, cartography, astronomy and scientific measure instruments are closely linked in our understanding of the world.

Why are maps so pleasingly decorated?

The iconographic representations of a map characterize the experience, taste and knowledge of an era. It brings additional meaning and information to the pure cartographical outline. The figures duplicate the signification of the map and even reveal information of a more general order, like the fragments of a visual encyclopedia in which the natural of ethnographic particularities of a place or a region are exposed. Moreover, a map’s iconography facilitates the understanding of complex and rigorous topographical contours. It renders them more familiar to the eye of the user. The drawn figures are indeed better suited to strike the memory and the imagination of the reader. To the fully deciphered, interpreted and appreciated a map must be introduced within known and common visual markers of a given time. 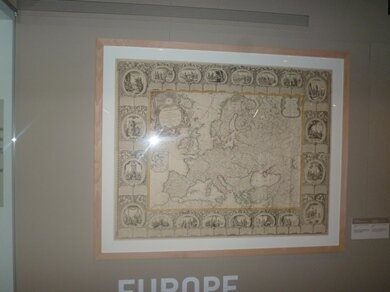 The Stewart Museum managed a collection of about one thousand cartographic documents, excluding some 500 artefacts and scientific instruments related to navigation, cartography, astronomy, mathematics, land surveying and drawing. This represents near 4% of the whole collection.

The founder of the Museum, David Macdonald Stewart, started this collection in the late 1960. He favored a global approach to history and the collections reflected his will to assemble collections of objects, iconography, prints, books that would enable him to tell the story. The acquisition of rare maps of all kinds became more important in the late 1970 and progressed at a regular rhythm until 1985. The contribution to four exhibitions in France explains the cartographic quest.

In 1980, some fifteen of the maps were exhibited at the Château-Musée des Antiquités nationales in Saint-Germain-en-Laye in a major exhibition dedicated to “Frontenac and the Canada of Louis XIV”. The following year, almost thirty maps are included in the catalogue of the exhibition entitled “Birth of Louisiana” held by the Archives nationales de France at the Hotel de Rohan in Paris. And then, an exceptional contribution, the exhibition of the newly created Museum of the New World (Musée du Noveau Monde) in La Rochelle in 1982 added to the reputation of the collection. These congtributions convinced David Stewart that “the Museum’s collection has reached the level that gives it an international status”. 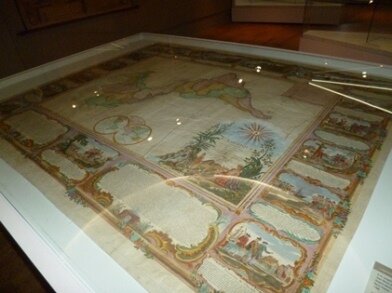 Finally, in 1984, sixty-four rare maps from the museum collection were the essential of “The discovery of the World, Cartographers and Cosmographers” exhibition presented in Saint-Malo Castle during the celebrations of the 450 anniversary of the discovery of Canada. It was then presented the following year in Paris, at the Canadian Embassy Cultural Center, and at the Stewart Museum and toured Canadian cities (Vancouver, Calgary, Ottawa and Quebec) for 18 months. 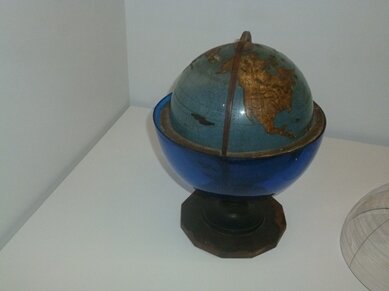 This extremely rare globe is to our knowledge unique in North America. It is one of the most intriguing and interesting item in Stewart Museum scientific object collection. Its main feature is not its scientific value but the fact that it was made entirely with glass. Signed and dated from An VII of the Republican calendar of the French Republic (1799), the globe is a stunning homage to the extraordinary period that was the French Enlightment. Photo : © ProvinceQuebec.com 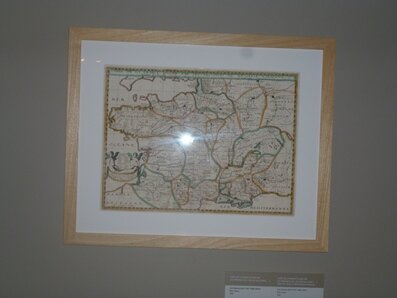 Map of Catholic provinces of France. Jean Boisseau (actif between 1637 and 1658), editor, Paris, France, 1642. Jean Boisseau re-edited in 1642 under a new title (The Gallic Theater) François Borgereau’s (active between 1591 and 1595) atlas le Théâtre Français (The French Theater) first published in 1594. This map of France is extracted from this atlas. Photo : © ProvinceQuebec.com 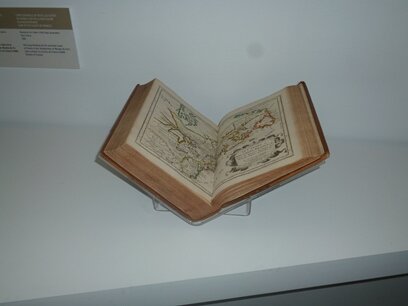 Atlas minor. Nicolas Sanson d’Abbevill (1600-1667, author Pierr Mariette, publisher, Paris, France, 1652. This book contains a special dedication for the museum : “This work was offered Monday March 3, 1980, to Mr. David Stewart for the profit of the Macdonald Stewart Foundation in the presence of his excellency Mr. Gérard Pelletier, Ambassador of Canada in Paris, by Frank Bauer in memory of the happy years spent in Montreal as commissioner of the French participation to Expo 67. Photo : © ProvinceQuebec.com