The Citadel of Quebec (Citadelle of Quebec) is a military installation in Quebec City, located atop Cap Diamant, adjoining the Plains of Abraham. This citadel is part of the fortifications of Quebec City, designated National Historic Site of Canada in 1981.

The construction of the fortress, typical of late 18th century and early 19th century, started in the 17th century, but during the French Regime, most of the work took place on the fortifications after the fall of Louisbourg in 1745.

The existing star-shaped fortifications however were built by the United Kingdom between 1820 and 1831 under the direction of Lieutenant Colonel Elias Walker Durnford of the Royal Engineers. This fort incorporated a small section of the French enclosure of 1745.

The purpose of the Citadel was to secure the strategic heights of Cap Diamant against a possible American invasion and to serve as a refuge for the British garrison in the event of attack or rebellion.

The Quebec Conferences of 1943 and 1944, in which Winston Churchill, Franklin D. Roosevelt, and William Lyon Mackenzie King discussed strategy for World War II, were held at the Citadelle of Quebec.

The citadel has been the home station of the Royal 22e Régiment of the Canadian Forces since 1920.

Inside the central citadel building are various rooms: sun room, ballroom, state rooms, bedrooms, dining room, kitchen. The building 10 is a former military prison and museum annex. The building 15, also known as the Powder Magazine is a Museum of the Royal 22e Régiment. The building 16 houses the Museum Office.

The Quebec Parliament Building and many other provincial government buildings and several large hotels are also nearby, towering over this citadel. 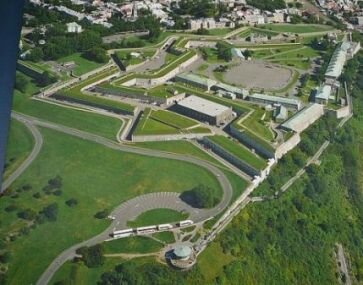 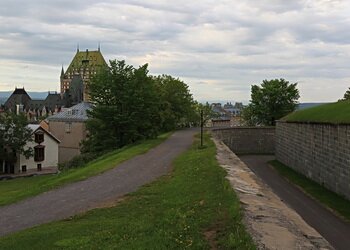 Fortifications of the citadel. Photo : © ProvinceQuebec