Argenteuil Regional Museum is located on route 344 in the picturesque village of St-André d’Argenteuil on the shores of the Ottawa River, an ideal place for a picnic.

Its collection offers a wide variety of drawings, paintings and sculptures. Indeed, Chelsea, Saxe, Wedgwood and Sèvres (to name a few of the big name manufacturers of porcelain represented in the collection) renders the refinement of the homes and of the tables of the inhabitants.

Feminine elegance is largely presented as well at the heart of the collection that spans between the periods of 1830 and 1960: taffeta corsage and silk velours, lace train, moiré skirt, aigrette hats and much more.

The collection of military memorabilia comprises examples of military weapons and accessories used by troupes who were stationed in the region such as the Argenteuil Rangers and Argenteuil residents who fought during the World wars.

The Victorian Collection, from the draped canopy bed, the Victorian work table, to the robust diamond point armoire, presents different styles and materials from exotic woods, pine, to marble.

The Argenteuil Museum houses examples of hand-made objects from the 19th century fabricated to decorate the home, such as wax decorations, straw stuffed birds, ornate floral decorations made of fine threads, hair, and feathers. These complicated techniques reveal a unique savoir-faire of the times.

As to ornithology, the wooded areas surrounding the museum are teeming with a great variety of bird species, many of which have been preserved for exhibit purposes.

Located in an agricultural region, the museum preserves many objects illustrating life on the farm, such as yokes for oxen.

The Historical Society of Argenteuil County possesses a large number of important documents, all indexed and computerized: daguerreotypes, signed photographs, corporate documents and educational documents, money, geographical maps, all of these can be consulted on the premises by research workers, by appointment.

To join the museum from Montreal, take highway15 to the Lachute/Mirabel exit then continue on highway 50 to the St-André d’Argenteuil exit.

Address & phone number of the museum: 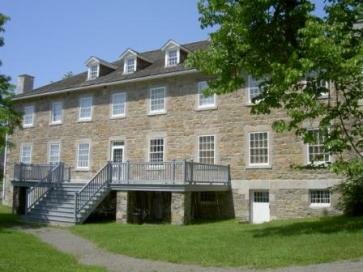