The Redpath Museum is one of the oldest museums in Canada. It was created in 1882 to house the collections of Sir William Dawson, famous naturalist and Principal of McGill.

The Museum is named after Peter Redpath, a director of the Bank of Montreal and a member of the McGill University Board of Governors. He established the first hall of the museum. Currently, the museum preserves and fosters the study of the history and diversity of the natural world. The Museum’s mandate includes geological, biological and cultural diversity. The Redpath Museum conducts academic teaching and research activities, and also provides academic services to other units of McGill University.

The museum holds extensive collections in the fields of palaeontology, zoology, mineralogy and ethnology. The Redpath Museum has several research labs and a Victorian teaching auditorium. The museum has close to three million objects, which include unique examples of extinct animals, fossils of the oldest known vertebrates, and the second largest collection of Egyptian antiquities in Canada.

Many visitors are drawn to the museum purely on the strength of the ethnology exhibits, such as its human mummies, evidence of the importance that the ancient Egyptian culture placed on life after death, mummies of animals, a selection of ancient Egyptian pottery and stoneware, a cast of the Rosetta Stone, African musical instruments and masks. The mammal collection of the Redpath Museum contains many rare species and spectacular skeletons such as the mink whale, a lion, a gorilla, a wolf, and many other mammals.

The invertebrate collection exhibits a wide variety of shells ranging from the small but valuable Imperial delphinula shell to the impressive two meter long giant spider crab. There is a family workshop series held on weekends called "Discovery Workshops" in the museum.

To learn more about the Redpath Museum:

Address of the Redpath Museum: 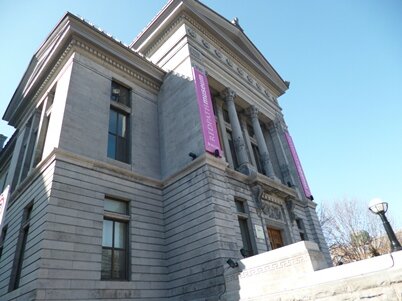