The site of the Museum of Lachine, located in the park Rene-Levesque, on the shoreline of St. Lawrence, dates back to 1669.

It was built by two of the most important merchants of the colony, namely Jacques LeBer and Charles LeMoyne to serve as a fur trade post. LeBer-LeMoyne House with its outbuildings is the oldest complete buildings on the Island of Montreal. The Museum is located 10 km from downtown Montreal. Nevertheless, the museum presents an exhibition of some archaeological fragments found in the ground and dating back some 2, 000 years.

The Museum of Lachine was open in 1998. More than 32,000 fragments and artefacts have been found here. They have been used to document the history of the site.

The educational services team of the Museum has conceived an exploration workbook, called Fouille-tout (in French) which invites students to visit Scene of Dreams exhibition with a special emphasis on the archaeological discoveries. Using historical objects, props and amusing headgear, under expert guidance, participants use scientific methods to carefully uncover artefacts, make observations and confirm hypotheses. The Lachine Museum is also an exceptional site for the presentation of contemporary art on the premises of Pavilion Benoit-Verdickt.

In addition, the Open Air Museum exhibits around fifty sculptures, making it one of the largest parks of its kind in Canada. The permanent sculpture garden has been built over a number of years. Many well-known artists have contributed to its creation.

This open air museum provides a pleasant route for walking or bicycling over a distance of four kilometres.

Address of the Museum of Lachine: 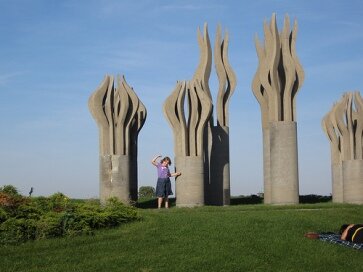