A friend, a brother, a saint.

“Pray to Saint Joseph; I will pray with you” (Saint Brother André).

November 22, 1870: Becomes a postulant for the Congregation of Holy Cross.

December 27, 1870: Receives the habit and the religious name of Brother Andre.

1901-1936: Brother Andre welcomes pilgrims and the sick on the mountain.

July, 1909: Appointed Guardian of the Oratory. 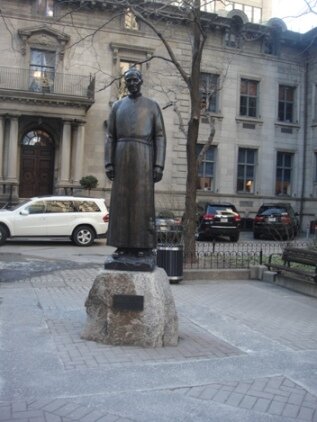 Monument of Brother Andre in the down-town of Montreal. Photo by ProvinceQuebec.com

Way of the cross. These gardens are a secluded site for prayer. We rely on your thoughtfulness to keep these ground lovely and quite. Please speak only in subdued tones. No smoking. Photo by ProvinceQuebec.com