The First Day of Montreal

The group left Sillery (today, a neighbourhood of Quebec City), on May 8, 1642 on board a pinnace and a barge, and headed for Montreal Island.

The partners of the Company of Montreal had chosen the name of Ville-Marie for the future town in honour of the Virgin Mary.

For a long time, everyone made a distinction between the name of the settlement and the name of the island. Thus the name of Ville-Marie retained official status in documents. The Jesuit superior, Father Barthelemy Vimont accompanied the settlers. Actually, historians depended principally on his account for information about the founding of Montreal.

Another source is the History of Montreal, written by Dollier de Casson thirty years after the founding of the settlement. Nevertheless, his account was based on his memory of what people had told him. His book is no doubt important and provides many details that give an excellent idea of how the first inhabitants lived. However, his word cannot be taken as the equal of Vimont’s when it comes to citing an exact date. Father Vimont sang Veni Creator and celebrated the first mess, the day Montreal was founded, on May 17, 1642.

Immediately, the Governor De Montmagny of Quebec placed Sieur de Maisonneuve in possession of the Island.

The settlers were put to work at once. A small fortress of large stakes and a barricade were built during the following days. Fortunately, the Iroquois did not appear and left the settlers in peace for many months. 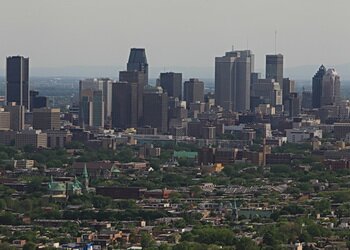