Lion from the La Feuillée Bridge

Montreal chose to install this Lion at the entrance of the Botanical Garden’s rose garden, as in the XIXth century, the city of Lyon, in France, was known as the City of Roses. Besides, the Montreal rose garden was inspired by the one in Lyon’s Tête d’Or Park.

A piece of Lyon’s architectural heritage, this Lion is one of a group of four created in 1831 to decorate the La Feuillée bridge in Lyon, a suspension bridge that crossed the Saône River, in the heart of the city.

The bridge was rebuilt in 1910, but it was blown up by the Germans in 1944 along with the city’s other bridges. The four lions were not added to the new bridge and were taken to the area around Lyon’s Service des Eaux (Water Department).

In 1962, two of these lions were placed at the main entrance of Gerland Stadium in Lyon, the third remains at the Service des Eaux building and the forth was donated to Montreal in 1992.

The lion, a symbol of prestige

In selection their emblem, many ancient cities, including Venice and Lyon, adopted the king of the jungle as a symbol of nobility, power, courage and strength. Indeed, the Lyon’s very name evokes this great feline and as of the XIVth century, it has been the symbol on the city’s coat of arms.

Since Antiquity, the lion’s artistic and heraldic iconography is ubiquitous, as this proud animal has been synonymous with power and strength. Vigilance has also been a characteristic attributed to this animal since the ancient Egyptians.

Every great civilization, as well as every great religion, has used the lion to symbolize royalty of the gods.

In Christian iconography, the lion takes on multiple meanings. As a force for good, it is associated with Christ and the resurrection, and it also represents St. Jerome and Mark the Evangelist. But it cans also represent the forces of evil and personify ferocity, lust and anger.

The Lion from the Feuillée bridge is symbolic of calm and stability: lying down with its paws resting, its mouth closed and its eyes open wide, the beast is aware of the surroundings.

Used first and foremost to complement other statues or for decorative purposes, the lion is the gatekeeper par excellence of prestigious monuments, buildings, bridges and gardens. 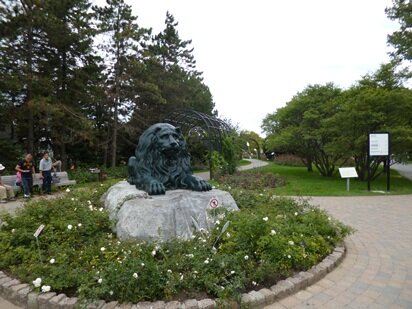 Lion of La Feuillée. Artist René Dardel (1796-1871), completed in 1831, installed on Juin 21, 1994, as donation from the City of Lyon, France in celebration of the 350th anniversary of the founding of Montreal in 1642. Painted cast-iron, produced by Berger, Canisius and Ramay smelters in Lyon, France. Photo by © ProvinceQuebec.com