Luncheon on the Grass

Luncheon on the Grass

Breakfast on the Grass

Born in St-Verain, France, in 1954, Dominique Rolland came to Quebec in 1956. Since then he lives and works in Montrel.

Among his public artworks are the stone sculpture Christian, at the Judith Jasmin Builing at Université du Québec à Montréal, and a monumental limestone piece installed in 1982 in the interior courtyard of the Marigot CSLC in Laval City.

Throughout the history of European art the theme of Luncheon on the Grass (Déjeuner sur l’herbe) has been repeated in a number of occasions. The most famous painting is that of Edouard Manet, painted in 1863, which caused such a furor when presented in Paris. Claude Monet made his version in 1865. Paul Cezanne also turned his hand to the subject.

The reference of this work is thus to late 19th Century paintings and the aesthetic departures they evoke.

Dominique  Rolland transposes this pictorial theme in three dimensional space. Contrary to its painted predecessors, the sculpture features the meal (cheese, bread, wine) rather than the guests. Like a still life it represents inanimate objects, but as an integral part of the park, it retains the lively nature and relaxed atmosphere of the impressionist works.

This granite, stone and bronze version of Luncheon on the Grass also experiments with format. Each of the components, such as a napkin, abandoned shoe, dog, bait, plate, bottle, is reproduced to a different scale, out of proportion with the others. 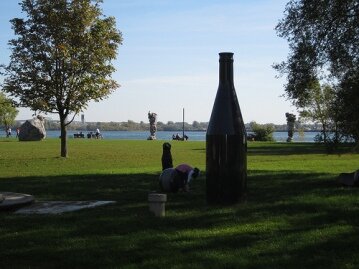