The Lachine Canal opened in 1825, enabling vessels to bypass the Lachine Rapids. Today, its imposing locks are used only by small pleasure craft, but the scene was very different in the past, when the canal could barely accommodate the large river freighters. Precursor of the St. Lawrence Seaway and cradle of Canadian industry, the canal has left its mark on a city where it continues to play its role in the modern era.

There were two major effects on the development of Montreal due to the enlargement of the Lachine Canal, as soon as its use changed from solely a means of avoiding the Lachine rapids to that of a vast industrial region within Montreal: a route was created to bypass the Lachine rapids and therefore open the upper St Lawrence River to navigation. But through the growth and development of the canal we see the creation of industrial suburbs of Montreal, as before the Lachine Canal, Montreal’s industrial region was located in its downtown area.

Thus, the Lachine canal proved an enormous boom for Montreal and the Province of Quebec. This water way continued to operate successfully until around 1950. Later, surrounded by the industrial developments which it helped to create, it could not be expanded further to cope with the continuing increase in vessel size.

Finally, the canal became obsolete, being replaced by the St. Lawrence Seaway, which opened in 1959. The canal was closed to shipping in 1970 and this event led to the devastation of the neighbourhoods that lined the canal in Montreal's Le Sud-Ouest borough due to shifting patterns of industrial development and shipping. 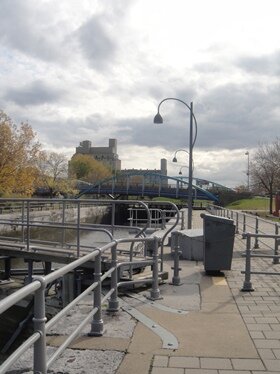 A valued landscape: This sector of the canal and the harbour were once the pride of Montrealers. Newspaper articles, architectural manifestos, master paintings and photographs all paid homage to it. Today, the industrial heritage needs to be protected as its vestiges are become increasingly rare. But who knows? Perhaps one day we will see postcards featuring the conversion of Elevator #5. Photo : © ProvinceQuebec 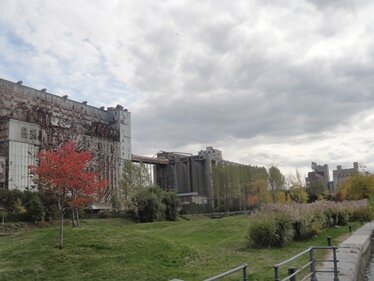 A world of elevators, Coveyors and Cranes: The entrance to the Lachine Canal was a cargo transfer point. The activity here was like a ballet where goods and commodities in bulk moved from canal boats to seagoing vessels, either directly or transiting through riverside hangars, warehouses and elevators. During the 1920s, largely thanks to the success of the canal, Montreal became the world’s largest inland port and its largest grain exporting port. Photo : © ProvinceQuebec 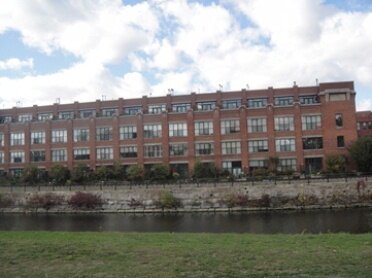 Stelco was created from the 1910 merger of several companies, including Montreal Rolling Mills, installed here in 1868, and Pillow Hershey, Dominion Wire and Hodgson, located elsewhere along the canal. Its huge rolling mills produced hardware products, as well as beams, pipes and metal plates. At the time of its final closure in 1985, the complex included several dozen buildings. The building used for shipping and storage was recycled into residential condominiums in 1988. Photo: © ProvinceQuebec 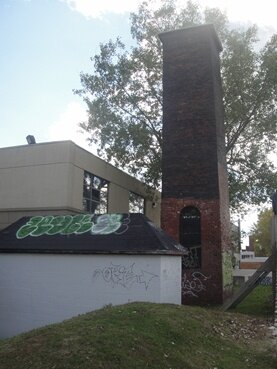 This truncated chimney is all that remains of one of the first plants to appear along the Lachine canal in the mid-19th century. Using the water power available alongside the lock, Consumers Cordage manufactured hemp cables and cord, as well as plaster for domestic industrial and marine markets. An immense covered shed, or rope walk, extended towards the aptly named Ropery Street and the Charlevoix Bridge. It was used for twisting long fibres into ropes. Photo : © ProvinceQuebec 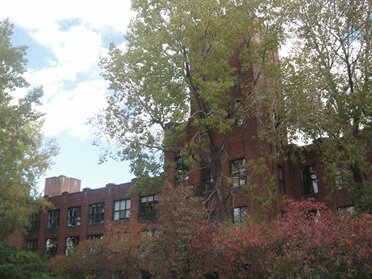 Located on the canal since 1896, Canadian Bag constructed its own building in 1913. This textile sector firm manufactured jute and cotton bags. It remained in operation until 1949. The building has retained its original volumes and is notable for its elaborate but restrained decoration. The brick treatment, large windows and ornaments such as pilasters and cornices are typical of early-20th-century industrial buildings. It has been a housing cooperative since 1989. Photo : © ProvinceQuebec 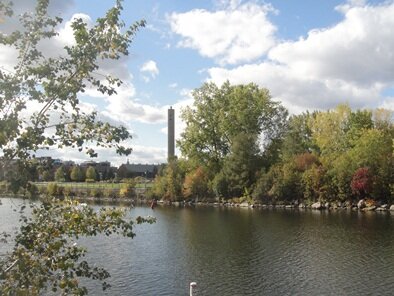 In 1846, Augustin Cantin founded Montreal Marine Works, Montreal’s largest shipyard, on the north side of the canal. The company, which employed 175 workers in 1851, could boast that it manufactured every part of a vessel from the keel to the tip of the mast. The complex covered 14 acres and included a foundry, a sawmill and dry docks. Some facilities were used until 1959, and the last basin was backlifted in 1975. Photo: © ProvinceQuebec 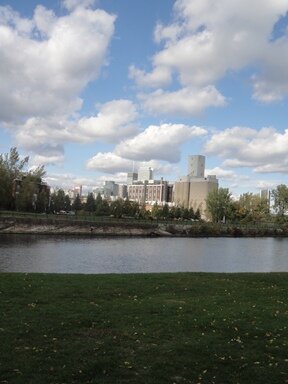 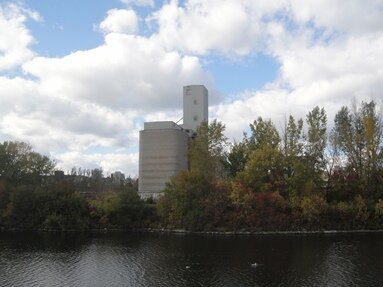 Enlaged in the mid-20th century, and subsequently modernized, it continued to use some of the older machinery, still in excellent condition. Nowadays, all the functioning Lachine Canal flour mills are owned by American agribusiness giants. Photo: © ProvinceQuebec 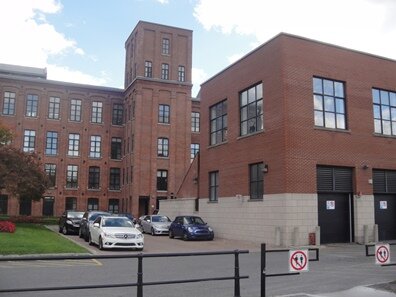 Belding-Corticelli Plant. The American-born Belding brothers built their factory on the south side of the Saint-Gabriel Lock in 1884. Their plant for converting raw silk into thread, ribbons and stockings was one of the first of its kind and the largest in Canada. The tailrace that can be seen under the main building attests to the use of hydraulic energy from the early days of the company until 1914. Photo: © ProvinceQuebec 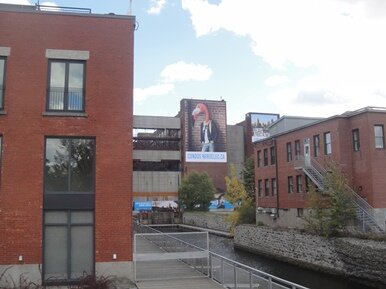 Nedelec Condos. Shut down in 1982, the Belding-Corticelli building was successfully recycled into residential condominiums in 1989. Photo: © ProvinceQuebec 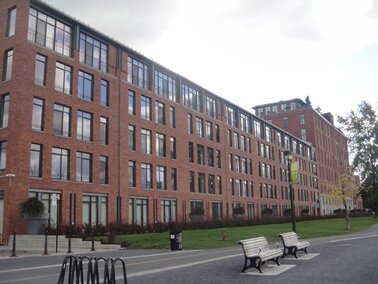 Canada Sugar Refining Company Limited (1829-1930). Canada and Dominion Sugar Company Limited (1930-1973). Redpath Sugars Limited (1973-1980).  This industrial building whose first two floors are of stone, is the oldest one still standing on the banks of the canal. Built by John Redpath in 1854, The old Redpath Sugar refinery at St-Patrick and Montmorency is now partially Lofts Redpath, converted after being abandoned since 1980. it was home to the first sugar refinery in the colony of Canada. Photo: © ProvinceQuebec.com 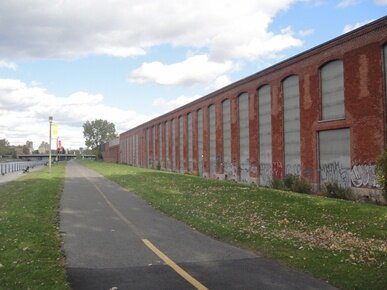 In 1930, the Redpath company merged with its rival, Ontario-based Dominion Sugar Co. Ltd, and became one of the country’s main sugar processing operations. The Montreal facility expanded and modernized many times during more than 125 years of sugar refining covering four city blocks when it finally closed. Photo: © ProvinceQuebec.com 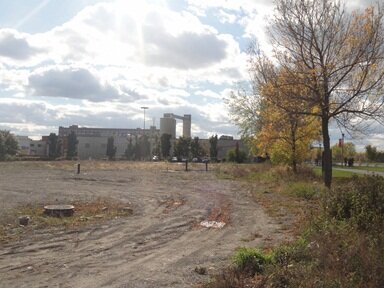 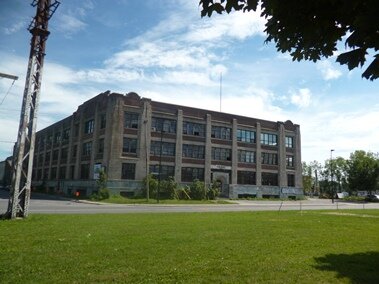 The Crane industrial complex, 1926. Made of prefabricated sections of reinforced concrete and steel, the Crane cast iron pipe and valve plant was extended several times following its opening in 1919. This successful American manufacturer had a virtual monopoly in the plumbing sector in Canada. The architectural interest of the main building lies in its detailed decoration embodying solidity and prestige, values dear to the company. The smelter on the 2nd floor is notable for its large arched vault. Photo : © Provincequebec.com 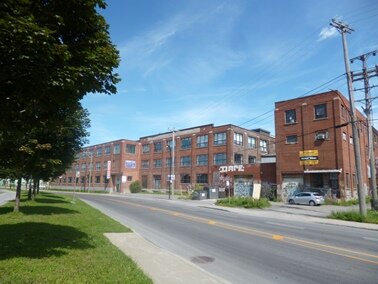 Congoleum Canada Ltd. Was established here around 1920. The company’s exotic name reflects its field of activity : the manufacture of jute flooring which gained strength and impermeability with the addition of asphalt from the Congo. Its water tower, a huge and very high reservoir of water, is one of the last of its kind to have survived on the banks of the canal. This plant in the textile sector was transformed into a multipurpose complex in the late 1960s. Photo : © ProvinceQuebec.com