Give Peace a Chance

Give Peace a Chance

Give Peace a Chance

In May 2010, Montréal created a place to commemorate John Lennon’s song that over time has become one of the world’s greatest hymns to peace.

Located at the Peel Street Entrance to Mount Royal Park, the installation by artist Linda Covit and landscape architect Marie-Claude Séguin of Groupe Cardinal Hardy blends public art and landscaping in a configuration that remains true to the place’s philosophy: it is an integral part of the park’s network of pathways. The stones interspersed with plants create an environment that serves as a transition between the downtown urban milieu and the green space that is Mount Royal.

Composed of plants and 180 limestone slabs on which Give Peace a Chance is engraved in 40 different languages, the work recalls the universality of the message and Montréal’s cultural diversity. It reminds also that John Lennon wrote and recorded his famous song with Yoko Ono during their bed-in in Montréal in 1969.

Give Peace a Chance encourages meditation, contemplation and reflection. While walking through the work, a person starts to stroll around. Without pursuing a precise objective, one can find meaning in this humanist message in this quiet environment.

This artwork was inaugurated on May 31, 2010 by the Minister of Culture, Communications and the Status of Women of Quebec, Ms. Christine St-Pierre, and the Mayor of Montréal, Mr. Gérald Tremblay. 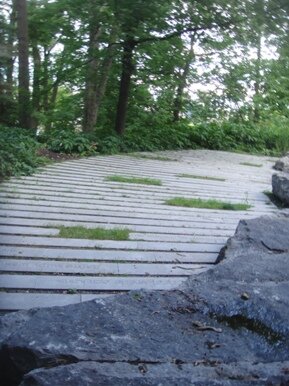 Give Peace a Chance. Photo © ProvinceQuebec