Berri Street or rue Berri in French is a major north-south street in Montreal, 11 km or 7 miles long. This street links De la Commune Street in the south and Gouin Boulevard in the north of the city, but the street is interrupted between Rosemont Boulevard and Jean Talon Street.

All Montreal Metro stations on the Orange Line between Berri-UQAM Station and Henri-Bourassa Station are located underneath Berri Street.

The Grande Bibliothèque (National Library and Archives of Quebec)  is located on Berri Street near De Maisonneuve Boulevard.

The Sir George-Étienne Cartier National Historic Site is located in the beginning of the street, on the corner of Berri and Notre-Dame Street.

The oldest segment of Berri Street opened in the 1690s when the Séminaire de Saint-Sulpice established a short path towards the St. Lawrence. This route became later known as rue Saint-Gilles. At the turn of the XIXth century, a small lane way was created by the name of ruelle Guy, near rue Saint-Gilles, between Saint Louis Street, and Saint Antoine Street. On August 13, 1818, this lane was baptised as Berry Street after Simon Després known as Le Berry.

Berri Street took its modern form beginning in 1895, when some expropriations of lands near the Viger Station allowed for Berri Street to be prolonged to De la Commune Street, fully integrating Rue Saint-Gilles. 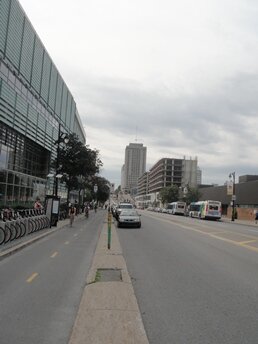