Mount Royal Cemetery covers 165 acres on the North slope of Mount Royal, The property extends 930 metres from east to west, and 1000 metres north to south, at an altitude of 165 to 225 metres above Montreal City.

The cemetery is one of the most beautiful garden cemeteries in North America. Laid out in a series of terraces following the topography of the mountain, the grounds are crisscrossed by footpaths and dotted with natural woodlands and flowery islets.

A walk through Mount Royal Cemetery, located on the site of old farms. is a lesson in history, revealing close to 200, 000 life stories which are commemorated and carved in stone. Many famous people are buried here.

Politicians, such as Sir John Abbott and Honore Beaugrand, victims of tragedies such as the sinking of the Titanic and the Lusitania, notable families such as the Redpaths, the Birks, the McCords, the Molsons, Sir Arthur William Currie, a great military leader of World War I, famous Anna of the King and I, and many more rest here. About one hundred tree species can be found in Mont Royal Cemetery.

From the thousands of trees located on the site, Hemlock, Catalpas, Austrian Pines, Norway Spruces, Kentucky Coffee Trees and Gingko Bilobas are some of these species. Half of the large tree selection in the cemetery is a combination of Red Oaks and Sugar Maples which are indigenous species. Besides, Crab apple trees and Japanese lilacs provide rare beauty.

Several species of annual and perennial flowers, including peonies and roses create an environment conducive to meditation and serenity. In winter, it is a haven for birds, drawn by the many fruit trees.

The cemetery has been frequented by some 150 species of birds over the years and is a great place to watch birds in the middle of Montreal. There are warblers and other migrating song birds, as well as screech owls, hawks, and nesting mocking birds.

The site is known as a favourite place for the Eastern Bluebird to raise their young and they use many of the nest boxes that have been placed throughout the cemetery.

To learn more about Mont Royal Cemetery: Web Site of the cemetery: www.mountroyalcem.com 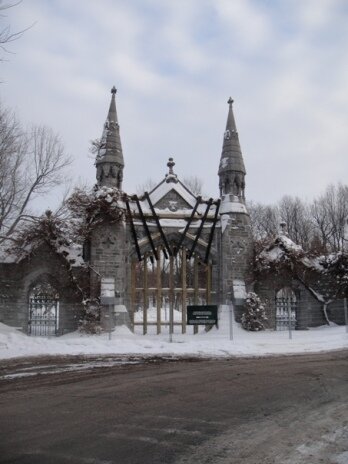