The sculpture the First Jewels, in the artist’s possession until 1989, was first installed on Sherbrooke Street in Montreal, in front of the Four Seasons Hotel between 1978 and 1980, and then on the terrace of Montreal City Hall from 1980 to 1991.

Following the death of Alice Winant, her husband, Mr. Edward J. Winant, donated the artwork to the City in 1990.

The sculpture shows a young woman with open hands; the artist originally had her holding a necklace. The exposed parts of her body are contoured, whereas the pleated fabric is smooth, creating a contrast between the two renderings. The draping, as well as the thrusting movement of her legs bring the statue to life. The young woman is wearing a scarf, which is perhaps a reminder of Winant’s years growing up in Romania.

Alice Winant was born in Roumania in 1928 and died in Montreal in 1989. Imprisoned by the Germans at Bergen-Belsen and Auschwitz, she was liberated in 1945 by the British Army.

She was then admitted to a Swedish hospital, where she stayed for two years, and where she started to study sculpture with the artist Carl Helbig. She later pursued her studies at the École des beaux-arts de Paris, before emigrating to Canada in 1954.

In her sculptures from the end of the 1960s, the artist focused on representing the human shape, particularly that of mothers and children, using bronzes in which texture plays an important role. Finding inspiration in the dense materials used in Alberto Giacometti’s sculptures, all the while maintaining classic contours, her subjects combine emotion with realistic representation.
In the early 1970s, Alice Winant exhibited with her colleagues from the Quebec Sculptors’ Association. She later distanced herself from the group to return to a more traditional representation of the human body.

She subsequently created polished bronzes that she enhanced with colour, particularly on the theme of dance.
Her career really took off in 1971, when she was invited to work at the Rodin Museum studios in Paris. Her works have been exhibited in Canada, the United States, Europe and Israel, among other places, and numerous Canadian, American and European institutions have bought them.

The subject of family was important throughout the artist’s career, as this value played a major role in her work. Whether alone or in a group, Alice’s subjects are captured as they experience ordinary but happy moments from everyday life. 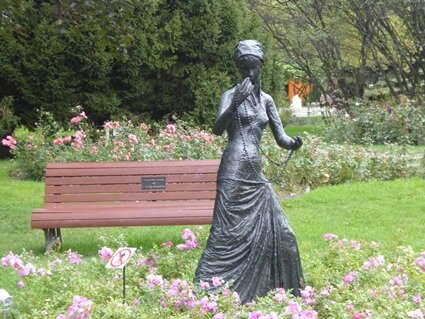 The First Jewels by Alice Winant. “It is possible that sculpture has become the discipline symbolizing survival, a way of creating forms and of finding order in inanimate matter” (Quotation taken from the Montreal Matin daily newspaper, May 29, 1972). Photo : © ProvinceQuebec.com