Remnants of the General Hospital of Montreal

Remnants of the Chapel

The stone wall is a remnant of the first chapel constructed in 1695 and completed in 1704. The building was part of the former General Hospital of Montreal established in 1693 by the Freres Hospitaliers, commonly called les Frères Charon. On August 27, 1747, the administration of the General Hospital of Montreal was transferred by royal ordinance to Madame Marguerite d’Youville.

The stone wall, as well as the sacristy originally built in 1771 were restored in 1991-1992. This former sacristy with its slanted metal roof serves today as a maintenance shop and warehouse for the Maison de Mère d’Youville.

The chapel building was distinguished from the hospital by its arched openings. Gutted by fire in 1765 then rebuilt in 1767, this chapel underwent major modifications from 1831 to 1833. Most of it was demolished in 1872 to make way for St. Pierre Street. Some architectural elements were buried under ground. The carved stones lying on the grass and those on the left in the former opening between the chapel and the sacristy were part of the interior and the colonnades of the chapel.

This text is engraved on brass patinated blades covering three arched openings in the wall.

The Grey Nuns of Montreal

Throughout its history, the General Hospital has undergone several transformations. Observe the chronological evolution of its building.

The archaeological remains of general Hospital of Montreal were discovered between 1996 et 1997: the church walls and parvis, the walls of the Sacré-Cœur chapel, the wing of the Pauvres, the balcony of the Orphelines, the absidal chapel, the garden grounds and the sepultures. These discoveries were made during the archaeological digs carried out prior to the road repairs on St. Pierre Street. The presence of these remains demonstrates, one more time, that the building of a street often preserves the remains in situ, and thus provides evidence of previous land uses within the stratigraphic layers.

The remains of General Hospital of Montreal

Built in 1693, the General Hospital of Montreal was first controlled by the Charon Brothers and then by the Grey Nuns, founded by Mother Marguerite d’Youville. It constitutes one of the oldest religious building complexes in Old Montreal. Located on the periphery of the city between the St. Lawrence and St. Pierre Rivers, the institution was reduced in size in 1836 following the intense economic development of the city, when the importance of the port and the construction of the Lachine Canal necessitated the building of new streets, one of which subdivided the Grey Nuns’ property. Consequently, the Nuns left Old Montreal in 1871 only to return in 1981, after an absence of more than a century.

The archaeological digs underway since 1979 have permitted the discovery of numerous artifacts indicative of the daily life of the religious community over a period of over 200 years.

In 1693, fifty-one years after the founding of Montreal, François Charon built a “Home of Charity” at Pointe-a-Calliere. This was the site where Maisonneuve landed in 1642. Charon’s home was a refuge for those in need: the orphans, those with a handicap, the sick and elderly.

The property donated to the Charon Brother by the Sulpicians measured approximately ten acres, and was located near the St. Pierre River, which has become Place d’Youville.

The Sisters of Charity of the General Hospital of Montreal, commonly known as “Grey Nuns”

In 1747, civil and ecclesiastical authorities gave the Brothers’ General Hospital to Marguerite, widow d’Youville and foundress of the Grey Nuns. She took possession and entered the Hospital with the poor on October 7 of the same year.

On May 18, 1765, the General Hospital was destroyed by fire; only the walls stood. Confident in God’s Providence, Mother d’Youville rebuilt the institution according to its initial plans.

On October 6, 1871, the Grey Nuns moved to the corner of Guy Street and Dorchester Boulevard (now Rene-Levesque).

Recurrent floods, the development of the Port of Montreal and the growing Congregation made this move a necessity.

For 110 years, the Grey Nuns rented the General Hospital and its dependencies as warehouses. This measure allowed the Sisters to serve a greater number of poor at their new Mother House on Mont Saint-Croix.

Return to the origins

On February 20, 1981, the Grey Nuns returned to their original Mother House. The restored home is presently the headquarters of the general administration of the Sisters of Charity of Montreal, Grey Nuns. It has become a centre of animation for the works of the Congregation. Their goal remains to serve those in need and to show the compassion of God the Father.

There we find the room where Mother d’Youvill died on December 23, 1771. This area is a special and authentic haven for all Grey Nuns.

Another section formerly known as the “day shelter for the poor” was the place where those in need who could not be sheltered within the General Hospital were welcomed and helped. Every human distress was comforted.

Mother d’Youvlle trod these stones. She never considered her needs first, but always the service of the destitute. She Would oftentimes kindle the fireplace to prepare hot soup or another dish to satisfy the hungry. Today, the initial character of its stones and chimney witness to its original mission of this room.

A financial contribution granted by the department of communications Canada, through its cultural initiatives program, made possible the restoration of the sacristy and the enhancement of the chapel`s stone wall remnants. The Grey Nuns acknowledge also the contribution of the ministry of Cultural affairs of Quebec and of the city of Montreal. 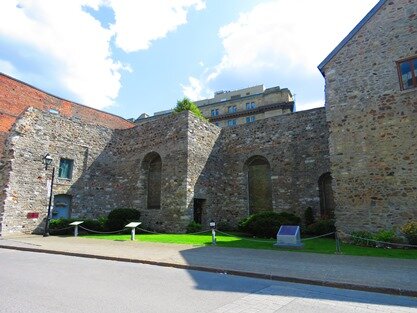 Remnants of the Hospital. Photograph by ProvinceQuebec.com 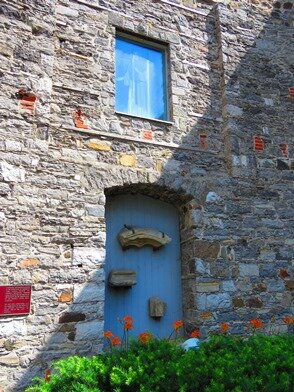 Stone of the old chapel. Photograph by ProvinceQuebec.com