Pollinating insects play an important role in fruit production. Growers place beehives in their fields, for example, as a way of boasting their berry crop yields and quality. But pesticides can hamper these valuable allies and even threaten their survival.
Berries.

Oleaginous plants from a large number of botanical families are grown mainly for their oil-rich seeds or fruit. In addition to being used in food for humans, vegetable oil is an ingredient in cosmetics, paints, plastics, detergents, biofuels, ink and much more. Many oleaginous plants are also fed to livestock in the form of meal or seed cakes. For instance, flax seed is added to chicken feed to increase eggs’ Omega-3 fatty acid content.

Textile plants supply natural fibres used in making such everyday necessities as clothing fabric, nets, canvas and rope. Some of these plants, like flax, have been known and used for thousands of years. Just think of the linen cloth used to wrap the bodies of the pharaohs discovered in Egyptian tombs.

Cotton, jute and linen are still very popular, but the synthetic fibres available since the early 20th century have edged out other once common plant fibres. These new fibres, made from petroleum glass, coal and other products, are not biodegradable, however. For environmental reasons and because they are well suited to specialized uses, there is renewed interest in some plant fibres, including the somewhat controversial hemp. 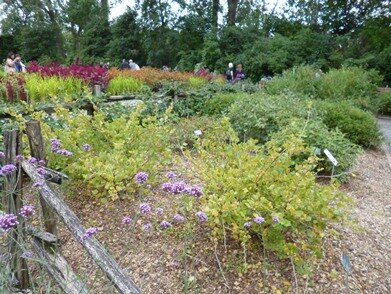 Berries, in hues of blue, red and black, delight young and old with their many flavours. They are also rich in vitamins, minerals and antioxidants. In addition to the traditional jams, jellies and sauces, some Quebec growers now offer berries in a variety of delicious guises, from fruit-based ice wine and liqueurs to oils and vinegars. Image by © ProvinceQuebec.com 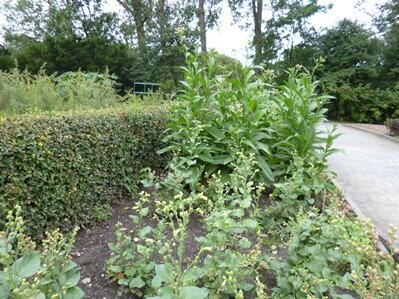 Tobacco is a member of the Solanaceae family, along with tomatoes and potatoes. Its aromatic leaves are used in making cigarettes, cigars and pipe and chewing tobacco. A number of cultivars are also grown as ornamentals. Tobacco was domesticated some 8,000 years ago. Natives were growing it before Europeans arrived. It was part of many ceremonies, where it was smoked, inhaled, chewed, steeped, taken as snuff or offered to the Great Spirits to invoke theire blessings. Some of the earliest settlers in Quebec grew tobacco as a cash crop. Today, as a result of anti-smoking campaigns and freer international trade, very little tobacco is grown in Quebec commercially. Photo: © ProvinceQuebec.com 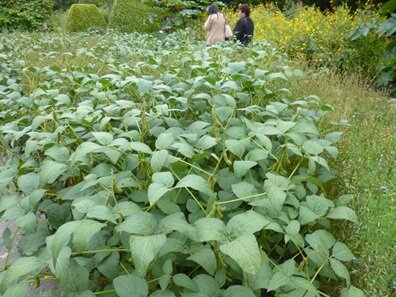 Oleaginous Plants : Canada has gone from being an importing country 30 years ago to a net exporter of oil and edible oleaginous plants today. The main crops involved are canola (a Canadian variety of rapeseed), soybeans, flax and sunflowers. Photo: © ProvinceQuebec.com 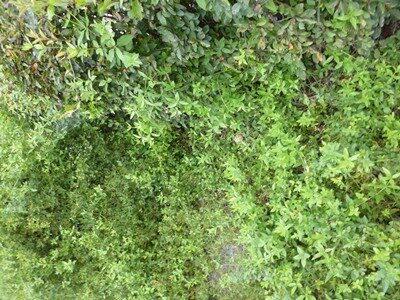 Dye-producing plants: Madder. This perennial plant native in the Middle East and the western Mediterranean was the main source of red dye in medieval Europe. It remained popular until synthetic dyes appeared in the late XIXth century. The roots can be ground into a powder and used as a bright and fabric dye, which may turn pink, orange, brown or black depending on the quantity used. Photo: © ProvinceQuebec.com 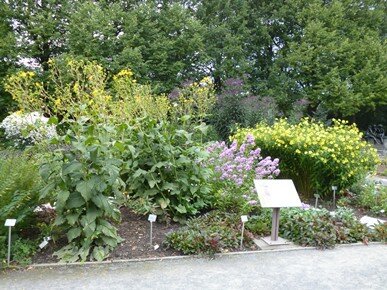 Perennial Garden: Perennials for attracting butterflies and hummingbirds. These winged visitors are fond of quiet, sunny, pesticide-free gardens with shelter from the wind and a damp corner where they can find water and mineral salts. Many perennials native to North America are attractive to various species of butterflies, while others are especially popular with hummingbirds. Butterflies are drawn to fragrant flowers, often yellow or purple ones. They drink nectar with their long “tongues”, which function much like straws. Single-flowering perennials usually produce larger amounts of nectar, which is also more easily accessible than in double-flowering hybrids. Other plants, mixed in amongst nectar-bearing species, provide shelter and food for caterpillars. Hummingbirds have little interest in fragrant plants. Instead, they are attracted to tubular red or orange flowers that stand out clearly against a dark backdrop. Photo: © ProvinceQuebec.com 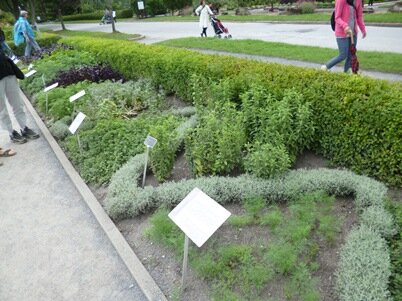 Spice plants : Since time immemorial, people have used some plants’ leaves, roots, seeds, bulbs and stems to enhance the flavour of food. These plants may also be used as appetite stimulants, digestion aids or food preservatives. Most of the plants grown in the Garden of Useful plants are herbs belonging to the Apiaceae family (coriander and parsley) or the Lamiaceae family (marjoram and basil). The vegetables grown in this patch can also be used as flavour enhancers (garlic, fennel, onions, shallots). Growing spice plants is a way of enjoying their flavour, fragrance and beauty. The can be grown in easily accessible containers or incorporated in a flower or vegetable garden. Many of these plants attract pollinating insects. Photo: © ProvinceQuebec.com 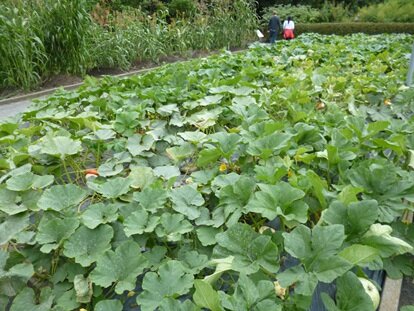 Root Vegetables : This category of foods has not always been popular. During the Middle Ages and the Renaissance, people thought of roots and bulbs as poor foodstuffs, eaten at best by peasants. Today, potatoes, carrots and parsnips are properly appreciated as top-notch healthy foods. The starch they contain is digested slowly, making them a good source of long-term energy. They also provide minerals and vitamins. In general, we eat the fleshy part of root vegetables, cooked or raw. Photo: © ProvinceQuebec.com 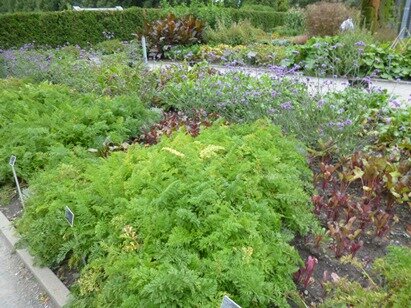 Some root vegetables can also be processed to make starch, sugar, flour, alcohol or coffee substitutes. In Europe, table sugar comes mainly from sugar beets, while in Quebec it is made from sugar cane imported from countries to the south of us. Photo: © ProvinceQuebec.com 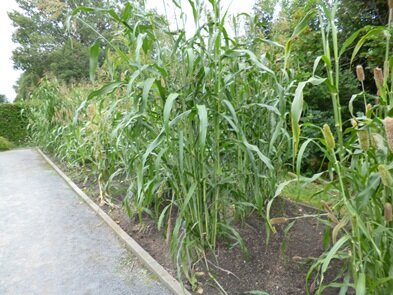 Grain plants provide some of the world’s basic foodstuffs. In addition, certain grain crops are harvested before they are fully mature to serve as fodder for livestock. Over 70% of cultivated land worldwide is devoted to growing grain. With the widespread use of pesticides and synthetic fertilizers, yields today are 50 times greater than during World War II. This has had a huge negative impact on soil life and species diversity, however. The rising popularity of sustainable agriculture and its respect for soil, air and water quality augur well for biodiversity. For consumers, these new practices mean that organic and fair-trade products are more widely available. Photo: © ProvinceQuebec.com 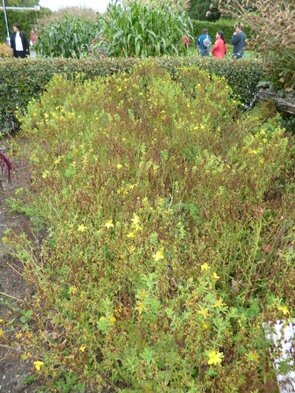 Dye-producing plants : Although natural dye-producing plants are used today mainly for craft purposes, for thousands of years they were the only source of dyestuffs, adding colour to the cloth and garments of the world’s greatest civilizations. It was not until the late 19th century, in fact, that synthetic dyes gradually replaced natural dyestuffs. The first such synthetic product, Perkin’s violet or mauveine, was an aniline dye discovered accidentally by a young Brithis chemist attempting to synthesize the anti-malaria drug quinine. Photo: © ProvinceQuebec.com 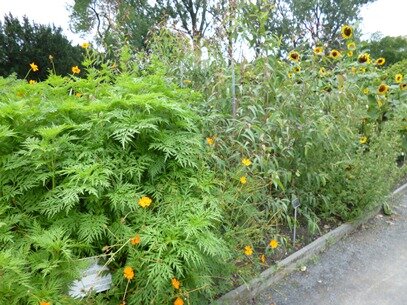 All parts of dye-producing plants may be uses to obtain dyestuffs. Is some cases, the colour may be visible on the plant before it is harvested, while in other cases the colour is revealed only on contact with air, when certain chemicals are added or after fermentation. The final colour may also be determined by the extraction processes. Photo: © ProvinceQuebec.com 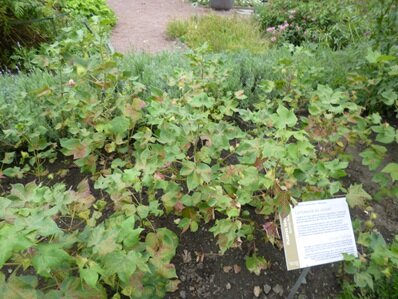 Textile plants: Levant Cotton. The origin of cultivated cotton remains a mystery. Traces of its use dating back to almost 3200 years BC  have been found in Pakistan, while cotton fragments old of about 5800 years BC have been found in Mexico. Traditional methods for growing cotton, one of the largest non food crops in the global economy require enormous quantities of pesticides.  Organic growing of hybrids from the highest-yielding species (G. hirsutum and G. babadense) might be an attractive and interesting option. Photo: © ProvinceQuebec.com 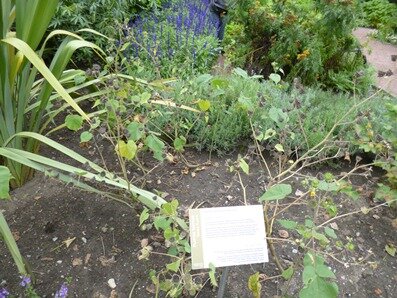 Textile Plants, Velvetleaf (Abutilon theophrasti. Malvaceae): This annual plant native to Asia was introduced to Europe and North America, where it has become naturalized. While it is prized in Asia for its strong and flexible fibres, it is feared in North America for the way it quickly invades farmers’ fields. Its many seeds remain viable for up to fifty years and the plant grows rapidly. Photo: ProvinceQuebec.com 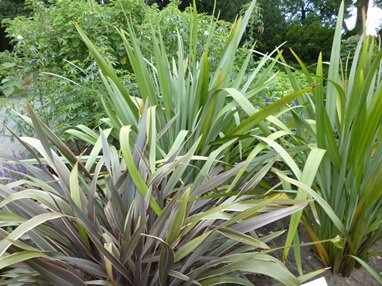 New Zealand Flax (Phormium tenax, Agavaceae): This plant native to New Zealand has traditionally been used by the Maori. Over the centuries, they have developed a number of cultivars to meet their needs. The leaves are very useful in making basketry, clothing and toys. They can be turned into rope, thread, fabric and paper. Photo: © ProvinceQuebec.com