Nelson Column was erected by a group of merchants of Montreal in 1809 on the Jacques-Cartier Place, in the heart of down-town Montreal. The eight foot statue is the world's first Nelson commemorative and precedes that in London by 33 years.

Subscribers for the monument included both English and French, since the French Revolution was popular with neither.

The monument is located in Old Montreal. It has carved scenes from Nelson's career around the base Nelson's column was the second monument to be erected in Montreal.

In Montreal as in Nelson's Column from London, the admiral stands with his back to the waves.

In fact, what we see on the Place is a copy of the original column. The Horatio Nelson statue that originally stood on top of Nelson's column in Place Jacques Cartier is now found at the Centre d'histoire de Montréal, after it was removed in 1997 to preserve it from the weather.

Well, a monument to a British victory over France in a city that is predominantly French-speaking, the column has garnered its share of controversy, and in 1930, francophone residents of Montreal responded by erecting a statue commemorating Jean Vauquelin, a French hero during the Seven Years' War.

The Vauquelin Square is just in face of the Nelson Column. 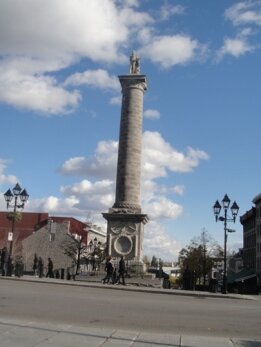