Located on Phillips Square in downtown of Montreal, the Edward VII monument was created by artist Louis-Philippe Hébert and unveiled on Octobre 1, 1914 by the Governor General of Canada.

Edward VII visited Montreal in 1860, when he was still the Prince of Wales.

Four allegorical figures: Peace, Four Nations, Abundance, and Liberty, sit at the base of the statue.

Peace is represented by a woman holding the olive branch. She keeps a sword hidden in the folds of her skirt.

At the back of the monument, Winged Genius, represents Liberty. The angel has broken the shackles of religious prejudice and persecution and is a reminder that during Edward VII reign he extended respect and dignity to all his subjects around the world, regardless of race, colour, or creed.

The statue faces The Bay/La Baie (585 Ste-Catherine St. W.) which has been doing business in Canada for more than 300 years.

Phillips Square is named, for Thomas Phillips, a building contractor and city councillor who bought the land. After his death, his widow donated the property to be used a perpetual memorial to her husband. 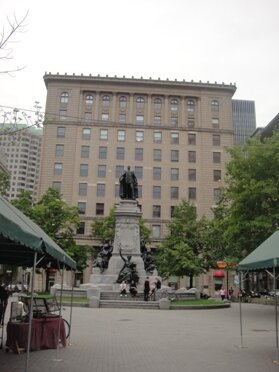