For centuries now, the Chapel of Notre-Dame-de-Bon-Secours, built in 1771, has made its way into the hearts of pilgrims and visitors. As guests step into the church, they can’t help but fee feel a palpable link to Montreal’s past.

The chapel was built over the ruins of the first stone chapel built in 1675, which perished in a fire of 1754, but the Montrealers rebuilt a chapel when it seemed impossible.

Guests can see a little wooden statue on the left side-altar of the chapel. This statue has an interesting history. Indeed, after her trip back to France in 1672, Marguerite Bourgeoys brings a statuette of Notre-Dame-de-Bon-Secours for the chapel. The fateful day in 1754, when fire ravaged the chapel, only the statue and its reliquary remained intact.

To two cameo paintings by a famous Quebec artist painter Ozias Leduc are exposed here. One of these works shows Paul Chomedey de Maisonneuve, founder of Montreal, and the other one presents Marguerite Bourgeoys, the first teacher and founder of the Congrégation de Notre-Dame, who rallied the colonists to build the first chapel of stone in Montreal.

Under the choir loft, an intriguing painting is located. This is the gift of Bishop Bourget to the Chapel, made to give thanks for the end of the typhus epidemic that struck Montreal in 1847 and when more than 6 thousand people died in the city. Another gift of Bishop Bourget is the statue by Charles Dauphin called Star of the Sea, on the roof of the chapel overlooking the port.

For centuries, the Notre-Dame-de-Bon-Secours chapel was a favourite place of prayer for sailors, thus many carved replicas of sailing ships hang from the vault of the chapel as a reminder of their faith of the sailors.
The highest view of Old Montreal is seen from the tower of the chapel will. 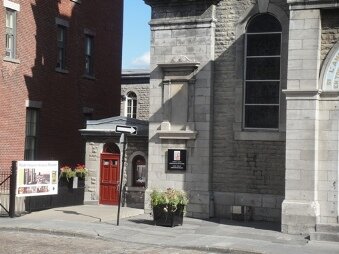 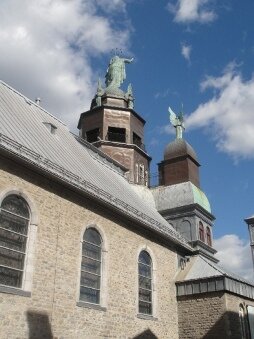 You can read more about the Chapel: