Ogilvy's (or Ogilvy in French), known as Maison Ogilvy is a prominent department store in Montreal, where its store on Saint Catherine Street is a retail landmark.

Ogilvy's was the first department store in Canada to adopt the "store within a store" concept, whereby the store features a collection of independent boutiques under one roof. Each boutique has its own unique character, while sharing common customer policies and standards. Ogilvy's also contains a restaurant, hair salon, florist and interior design consultants.

Ogilvy's, founded in 1866 by James A. Ogilvy, a pioneer in Montreal retailing, is the only one of Montreal's four west-end department stores still operating under its original name and since 1908 it has been located in a Romanesque Revival stone building built in the great style of the day.

In 1927, the store was acquired by Arthur J. Nesbitt, of Scottish ancestry, an investment banker and a partner in Nesbitt Thomson & Co. stock brokerage and the energy conglomerate, Power Corporation of Canada. The new owner's son, J. Aird Nesbitt, took over management of the Ogilvy store. J. Aird Nesbitt created a style and personality for Ogilvy's that distinguished it from Montreal's other department stores. He opened the Tudor Room, a concert hall on the store's fifth floor.

The first Montreal Symphony Orchestra broadcast across Canada originated from this hall in 1931. Nesbitt also initiated another Ogilvy's tradition in 1950 when he hired two bagpipers to parade through the entire store between noon and 1 pm every day. Today, a piper continues to march through the store daily.

Ogilvy's changed hands in 1985. The new owners renovated and revitalized the store interior, and a "new" Ogilvy's emerged in 1987.

Ogilvy's is renowned for its yearly, vintage Christmas window display. These mechanical windows have been a well-known tradition with Ogilvy and Montreal since 1947, since the first one was brought in from the Steiff Co. of Germany. More than 100 moveable parts, featuring handmade, animated stuffed animals involved in a variety of activities cover the entire corner window of St. Catherine and De la Montagne Streets.

These sceneries "The Enchanted Village" and "Mill in the Forest" illustrate the traditional aspects of Christmas. 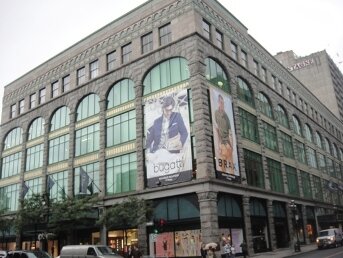