Designed by Ross and Macdonald, an architectural firm from Montreal, and erected on the site of Montreal High Scool, the Cours Mont-Royal was completed in 1922 at 1455 Peel Street.

Other famous buildings by Ross and Macdonald in Montreal include Holt Renfrew, the Montreal Neurological Institute, the Centre Eaton, the Dominion Square Building and Trinity Memorial Church in Westmount.

This hotel used to be the largest of its kind in the British Empire, with 1,100 rooms.  The construction of the building in the Beaux-Arts architectural style was part of a larger trend in the then largest city of Canada to attract high-class tourists with luxurious edifices.

The interior was gutted and the exterior was cleaned and repaired in the late 1980s. The only internal remnant of the hotel is the ceiling of the big entrance lobby. This lobby has a huge chandelier brought from the Monte Carlo casino.

Known for its fashion boutiques, Les Cours Mont-Royal Shopping Centre is mainly composed of fashion retailers, with a few additional features and services including Montreal's largest spa and a catwalk for fashion shows and other events.

The shopping area is organized around four large courts, hence the French name "Les Cours". Under the main skylight there are six bird-human sculptures by the Inuit artist David Ruben Piqtoukun.

The top of the Cours Mont Royal has several floors of luxury condos. They have separate elevators and entrances, set apart from those of the shopping centre's street doors and subway tunnels. In between the top condo levels and the mall at the base there are several floors of office space.

The building is accessible via Peel Metro Station and connects to the city's underground network of shopping centers, hotels and transportation hubs. 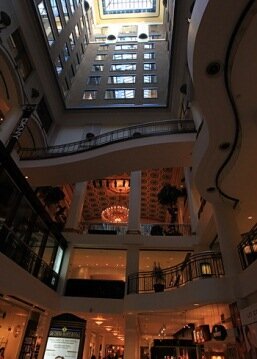 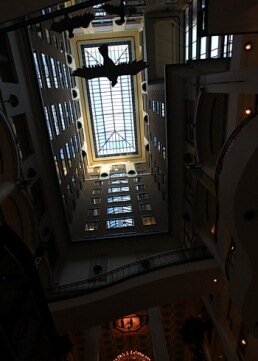