The Jacques-Cartier Bridge is a steel bridge of total length of 2687 metres crossing the Saint Lawrence River from Montreal Island to the south shore at Longueuil. Its longest span is of more than 334 metres. The bridge crosses Sainte-Helene Island in the centre of the river, where off-ramps allow access to the Parc Jean-Drapeau and La Ronde amusement park.

It was opened on May 14, 1930. Originally named the Montreal Harbour Bridge, the bridge was renamed in 1934 to commemorate the 400th anniversary of Jacques Cartier's discovery of Canada.

The bridge was a toll bridge from its opening until 1962 and a toll plaza was located on the southern approach. The toll plaza area now houses the offices of the corporation that owns and operates the structure and the nearby Champlain Bridge. Tokens were issued for part of the period that tolls were collected.

The bridge was designed as a road, tramway, and pedestrian bridge; however tramway tracks were installed but never used. The roadway was expanded in 1956 and 1959 to include the space allocated to the tramway tracks, adding an extra lane of traffic in each direction. The two sidewalks were outside the bridge proper.

Today the five-lane highway bridge is 3,400 m (11,236 ft) in length, including the approach viaducts. There are approximately 35 million vehicle crossings annually making it the second busiest bridge in Canada that is operated by the Federal Bridge Corporation Limited, the first being Champlain Bridge, just a few kilometres upstream. However, Jacques-Cartier Bridge is the third busiest bridge in Canada overall after the Port Mann Bridge in Vancouver, connecting Surrey to Coquitlam. Its daily traffic is of around one hundred vehicles.

The bridge was built by Philip Louis Pratley (1884-1958), Canada’s foremost designer of long-span highway bridges in the first half of the 20th century. P.L. Pratley created a number of exceptional works that have become Canadian landmarks. During his career as a consulting engineer in Montréal he used the latest design theories and structural materials to build elegant, state-of-the-art structures. Several of his outstanding bridges have become widely recognized as symbols of their cities, including the Lions Gate in Vancouver, the Jacques-Cartier in Montreal, and the Angus L. Macdonald in Halifax. His monumental projects link the highways of the nation from coast to coast. 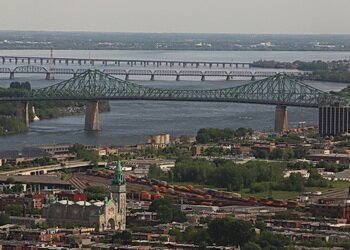 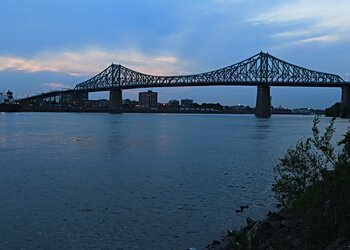 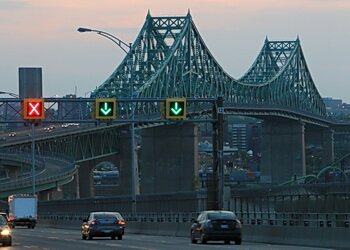 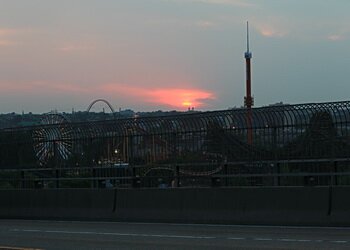 During the summer season, the bridge is regularly completely closed to vehicular traffic for the fireworks competition held at La Ronde. It becomes foot traffic only, sometimes drawing crowds of 50,000 people or even more. Photo : © V. Petrovsky 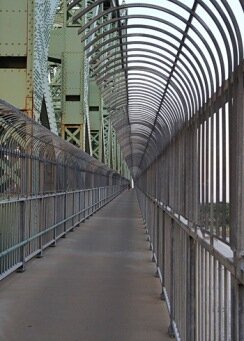 In 2004, a suicide prevention barrier was installed. Until then the bridge saw an average of 10 suicides a year., one of the highest rates in the world. Photo : © V. Petrovsky 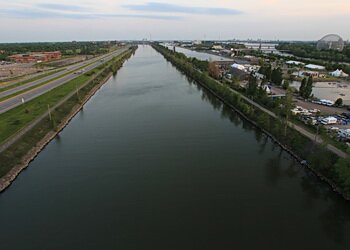 To accommodate large ships using the new St. Lawrence Seaway, the span over the east channel of the river (the Warren truss) was raised an additional 80 feet (to 120 feet) in 1957 and 1958. Traffic flow over the bridge was uninterrupted by this construction, through the installation of two Bailey bridges. Photo : © V. Petrovsky