The artwork Episode was on display for the first time in 1966 during the Stratford Festival of Ontario’s Second Sculpture Exhibition. It was shown that same year at the Confrontation 66 exhibit held at Place Ville-Marie, in 1967 on the esplanade of Place des Arts for Confrontation 67, and at Man and his World in 1968. It was finally installed at the Botanical Garden in the early 1970s.

At the beginning of the 1960th, Jean-Noël Poliquin experimented with abstract forms, as did most artists at the time. Episode is a deliberately non-figurative sculpture whose rhytm is governed by successive vertical elements bisected by a horizontal centre, striking a balance between alternating emptiness and fullness. The heaviest prices, in the shape of shortened arrows, are at the sculpture’s extremities; some of the more pronounced contours capture light and confer a sense of dynamism to the work.

In addition to creating an architectural piece, the sculptor strove to emphasize the material’s qualities. In his previous works, Poliquin used plaster, terracotta, polyester and bronze. The melted cement used for Episode and its horizontal axis combine to give a sense of stability to the sculpture.

His works from the second half of the 1960s, made of melted cement and bronze, are on a greater scale than his previous ones. Melted cement differs from Portland cement by its quick hardening and resistance to corrosion. It confers a very different physical presence to artworks than that of bronze as a result of its colour, its texture and its massive shape. Thanks to the steel frame, the artist was able to create overhangs that would not have been possible with bronze. A sense of weight is conveyed that steel could not have produced. Furthermore, melted cement is not considered a “noble” material in the same way marble or bronze can be. It is a modern material that allows for new experiences in plasticity and that is stripped of the past’s connotations. This period was attempting to break with tradition and seek new modes of expression.

The artist: Jean-Noël Pliquin was born in Trois-Rivières in 1927 and died in 1999. He graduated from the Institut des arts graphiques de Montréal in 1950 and lived in Europe from 1955 to 1956, where he studied method for teaching art to children.

Upon returning to Montreal, he taught painting workshops for children. During the 1960s, he exhibited most notably at the Galerie Libre and the Galeri Nova et Vétéra in Montréal, and took part in three exhibits entitled Confrontation and at the Salon de la jeune sculpture de Paris. He was President of the Quebec Suclptors’ Association in 1966, after which he created several works that were integrated into the architectural landscapes of Montréal, Mauricie and Montérégie. 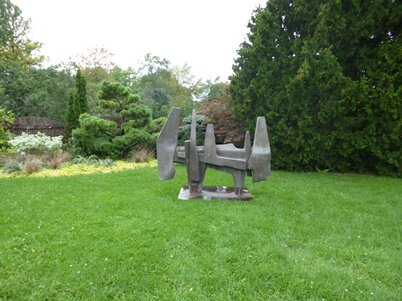