The religious life of Montreal has had its periods of prosperity and depression.

Thus, to describe it fully would necessitate extended excursions into political and social history Anyway, the Church played the determinant role through all the period of New France. The conquest of Canada by British arms in 1763 reversed the religious history of the colony and of its largest city.

The Quebec Act, adopted in 1774, gave to the Roman Catholic Church in Canada a few rights, but the Protestants came here, mostly from the United-States at the close of the American Revolution.

Nowadays, the Roman Catholic Church enjoys still a rather strong position in Montreal, but its influence and impact on the inhabitants has been lost. However, Montreal is still famous for its hundreds of churches. It’s well-known that Mark Twain said once that Montreal was “a city where you couldn't throw a brick without breaking a church window”. Indeed, the city features a wide array of churches, most of them representing being the predominant Roman Catholic faith.

Four Roman Catholic basilicas are present here: Mary, Queen of the World Cathedral in downtown Montreal, the Notre-Dame Basilica, St. Patrick's Basilica, and Saint Joseph's Oratory, the largest church in Canada, with the largest dome of its kind in the world after that of Saint Peter's Basilica in Rome.

Other well-known churches include among the other Notre-Dame-de-Bon-Secours Chapel, sometimes called the Sailors' Church, and the Anglican Christ Church Cathedral. 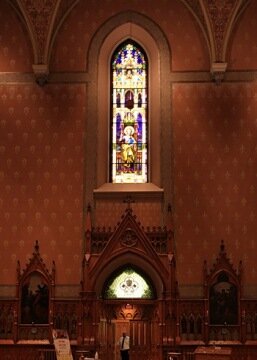