Before there was a Montreal Forum and a Bell Centre, there was Victoria Skating Rink, a large 252x 113 foot two-story brick building with a 52 foot high pitched roof supported from within by curving wooden trusses, which arched over the entire width of the impressive structure.

The Victoria Skating Rink was not the first indoor rink in the city, as the first rink had opened in 1859, at St. Urbain Street for the Montreal Skating Club. But certainly, the Victoria Rink was the largest, with an ice surface of 10, 000 square feet and its measurements eventuall became the standard foe hockey rinks in the North America.

The rink was built in 1862 between Stanley and Drummond Street just below St. Catherine, and opened on December 24th of the next year.  It was surrounded by a ten feet wide platform, which was elevated approximately one foot above the ice surface, upon which spectators could stand or skaters could rest. Later, a gallery was added with a royal box for visiting dignitaries.

Tall windows illuminated its interior while evening skating was made possible by 500 gas-jet lighting fixtures set in coloured glass globes. As a later date, the lighting was converted to electric, making the building the first in Canada to be electrified.

The ice was a natural ice surface, frozen by the coldness of the season, not by the later invention of mechanically-frozen ice.

The Victoria Skating Rink may be most famous for its connection to ice hockey history. The rink holds the distinction of having hosted the first-ever recorded organized indoor ice hockey match on March 3, 1875. It featured two teams (nine players per side), goaltenders, a referee, a puck, a pre-determined set rules, including a pre-determined length of time – 60 minutes, with a recorded score.

Games prior to this had mostly been outdoors, with sticks and balls, with informal rules and informal team sizes, In order to limit injuries to spectators and damage to glass windows, the game was played with a wooden puck instead of a lacrosse ball. The two teams, members of the Club, included a number of McGill University students. Sticks and skates for this game were imported from Nova Scotia, including Mic-mac sticks and Starr skates.

Lord Frederich Arthur Stanley of Preston, the donor of the Stanley Cup, witnessed his first ice hockey game there in 1889.

By 1906, the brick edifice was sold to J. William Shaw and by 1920s, it had deteriorated and the gallery became unsafe to use. Shaw sold the site in 1925 to the Stanley Realty Corporation. The Victoria closed and a parking garage was built in its place. 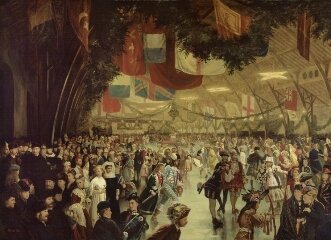