Phillips Square is a small place in the down-town of Montreal.

Phillips Square is named after Thomas Phillips, a building contractor and Montreal City councillor, who bought this land from fur trader Joseph Frobisher, one of the founding partners of the North West Company. When Thomas Phillips died, his widow donated the property to be used a perpetual memorial to her husband.

The first merchant to open a business on Phillips Square was Alfred Joyce, caterer and confectioner who built an elegant shop on the south side of the square in 1878. The following year the Montreal Art Association moved into a building along the east side.

The distinctive red sandstone building of Bay/La Baie, located at 585 Ste-Catherine St. West, in face of the square, has been doing business in Canada for more than 300 years. Indeed, the Hudson Bay Company began as a fur trading company in 1670 and over the centuries has developed into one of the world’s major corporations. The Bay/La Baie building was designed by John Pearce Hill and opened in 1891 as Morgan’s, which at the time was Montreal’s largest independent retail outlet. The store was enlarged in 1923.

The building’s foundations contains stones salvaged from Canada’s first Parliament buildings after they were burned by a mob in 1849 when Montreal was still the capital of Canada.

The site is of particular interest to visitors from the U.S. Confederate President Jefferson Davis sent his family to live in Montreal during the civil war. A brass marker installed on the west side of The Bay indicates the spot where Varina Davis and her four children lived during the war. The plaque erected by the Daughters of the Confederacy is in French only. It is dedicated to the memory of “Jefferson Davis, president of the Confederate States, who came in 1867 to stay in John Lovell’s house which then stood here.”

The Phillips square is dominated by a bronze monument to King Edward VII, designed by Louis-Philippe Hébert, and erected on Phillips Square, in face of Morgan's, in 1914. The four allegorical figures at the base of the monument represent Peace, Four Nations, Abundance, and Liberty.

The west side of the square is bounded by Birks, Canada’s answer to New York’s Tiffany’s. The jewellery store, designed by Edward Maxwell and built of Miramichi sandstone, opened in 1894. The boardroom is a replica of the one in the Bank of England, and the coffered ceiling in Wedgewood blue is alone worth walking in to see (Birks opened its first store in Old Montreal in 1879 and expanded since throughout Canada).

On the South side of the square is the Canada Cement Building, built in 1921. Designed by Barott and Blackader, the dignified 10-storey building was the first office tower to be built completely of reinforced concrete. From 1922 to 1927, Montreal’s first English language radio station, CFCF had its broadcast studios in the building.

The fast food outlet on the east side of Phillips Square (on the corner) is where Montreal’s first art gallery was opened by Princess Louise and the Marquis of Lorne in 1879. The first home for the Art Association of Montreal, and the first building in Canada “erected wholly for fine art purposes,” had one gallery with a skylight.

Dunn’s next door, at 1219 Phillips Square is one of Montreal’s oldest delis. Dunn’s reputation as a deli was established when an immigrant Meyer Dunn from Russia opened it in 1927 in the old Jewish neighbourhood around Mount Royal Avenue. In 1948 it moved to 892 Ste-Catherine St. West and its storefront window stacked with huge jars of dill pickles, banana peppers, and cheesecake became something of a local landmark. The restaurant closed in 1998, but the founder’s grandson revived it in 2000. 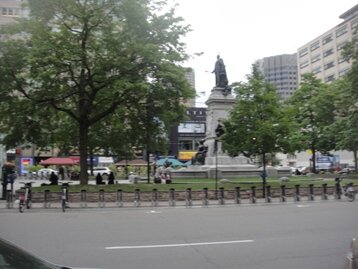