This site is a former residence of Sir George Etienne Cartier, one of the founders of Canadian Confederation and great reformer of Canadian institutions during the 19th century.

The site commemorates the life and accomplishments of this great man. The magnificent historic Victorian style home houses a ravishing and sumptuous décor. Exhibits and presentations draw a portrait of this statesman and the customs of the middle-class inhabitants of Montreal of his era.

The reconstitution of the two adjoining homes of the Cartier family also serves to recall the architectural heritage of 19th century Montreal. Besides, the site provides insight into the mores of this social class, Theatrical tours present political more and etiquette of businessmen, lawyers and politicians of those times.

The performances use the house’s Victorian décor as a backdrop for re-enactments that vary with each passing season.

Note : The Sir George-Etienne Cartier National Historic Site of Canada boasts a solid silver epergne, or centripiece, given to G.-E.Cartier by his electors in 1863. One of the few known historical artifacts commemorating Cartier's political career, this piece of silversmith's art, meticulously perserved by his descendents, served a primarily decorative function. Centrepieces of its kind are associated with the lifestyle of the Victorian bourgeoisie.

Address of the Sir Sir-George-Etienne-Cartier National historic site of Canada: 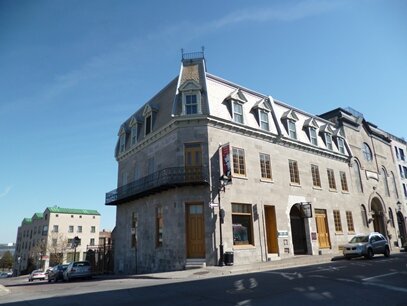