Empress Theatre is located at 5560, Sherbrooke Street West in Notre-Dame-de-Grace borough of Montreal.

Known as well as Cinema V or Cinema Five, this movie theatre was built in Egyptian Revival architectural style in 1927 by the architect Joseph-Alcide Chaussé and its interiors were decorated by a famous designer of theatres Emmanuel Briffa, an Italian who immigrated to Montreal.

Empress Theatre was the only theatre in Canada designed in the Egyptian style, inspired by the discovery of Tutankhamen's tomb in Egypt. For many years the building served a Vaudeville theatre for burlesque and first-run films. By the sixties of the XX Century it became a dinner theatre called the Royal Follies. In 1968 it was renamed Hermes/Cinema V, an art-movie cinema. Its interiors were rebuilt and divided for the occasion to become the two-tiered cinema. Later, in 1975, it became a repertory cinema. It was taken over by the Famous Players chain in 1988.

Gutted by a fire, the building was closed and abandoned in 1992 and for a long time this site has been in a state of disrepair.

Today the Empress Theatre is vacant. In the first years of the XXI Century, its tenants Geordie Productions, Black Theatre Workshop and the McGill Conservatory of Music were planning to restore the building. According to the plans, the completed theatre was to be used for performance and visual arts. The prospective plans included a café and an art gallery and a concert hall. The McGill Conservatory had plans to use the theatre for its music education program. But in 2010 the government funding was pulled and ownership returned to the city of Montreal in 2011. Concerned residents of NDG formed an ad hoc group called Renaissance Empress for preserving the theatre and transforming it into a cultural centre. Some experts suggest the only viable course of action is for the building to be demolished (but some others consider that the front façade could be saved). If the building is finally demolished, the photos of the Empress Theatre will be the only witnesses of its glory: 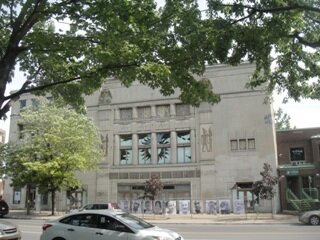