The Reid Wilson House is a nice example of the Square Mile houses built during the last quarter of the 19th century in Montreal. Like its neighbour, the Louis-Joseph Forget House, it is one of the few surviving mansions that once graced the north side of Sherbrooke Street.

In 1901, James Reid Wilson commissioned an extensive reconstruction of the 2-storey mansion, originally designed in 1883 by Montreal architect John James Browne. The noted Buffalo architect, Richard A. Waite, reconfigured the plan and the façades. He moved the main entrance to the extreme right of the building, reusing one of the original Gothic columns in his hew portico.

The building was acquired by Corby Distilleries Limited in 1951 and subsequently restored and renovated. Its conservatory and coach house are rarities among those mansions still standing. In 1974, the Governement of Quebec recognised the house as an historic monument.

This house is located along a circuit which is a joint project of Heritage Montreal and the Macdonald-Stewart Foundation as part of the celebration of the 350th anniversary of Montreal. A commemorative plaque was donated by Vins Philippe Dandurand inc and installed in 1992.

The Reid Wilson House is located at the corner of Sherbrooke and Drummond Streets. 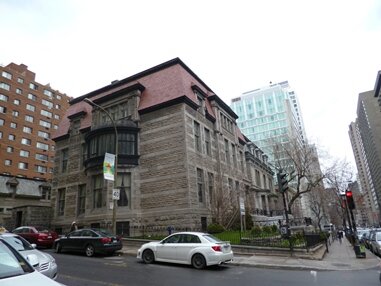