The International Fireworks Festival could be seen from everywhere, but its home is also here. Both islands were the main Canadian attraction in 1967, during the International and Universal Exposition, Expo-67. Several buildings designed for the event stayed on the islands and became Montreal landmarks: the US Pavilion (now the Montreal Biosphere), the France Pavilion (the Casino of Montreal), as well as Moshe Safdie's innovative Habitat-67 apartment complex.

Visitors can get to the islands by subway (Parc Jean Drapeau Station), or by the bridges.

A bike path links them to the mainland. 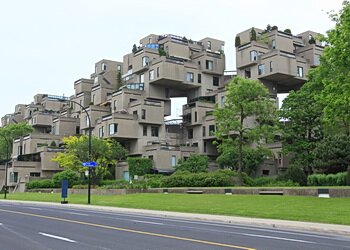