Located in Montreal’s downtown core, Complexe Les Ailes is visited by over eleven million people every year. The complexe features some 60 boutiques and services, including the Les Ailes de la Mode department store and such high-profile retailers as Tommy Hilfiger, Jacob, Lacoste and more.

With its remarkable architecture, contemporary décor, unique retail mix and direct access to the underground city and the McGill metro station, Complexe Les Ailes is GREAT shopping destination for locals and tourists alike.

Designed by Ross and Macdonald and built in 1925, the Eaton building was home to Eaton store, Montreal’s largest department store for decades. Over the years, it underwent a number expansions, thus in 1930-1931, three extra floors were added and the celebrated Île-de-France restaurant was launched. In 1958-1959 the building expanded toward De Maisonneuve Boulevard. In 1967, an underground link was added to the city’s newly inaugurated subway line, via the McGill metro station.

In 1999, Ivanhoe Cambridge acquired the property following the closure of the Eaton store. After considerable redevelopment work, this flagship of the Montreal retail scene was transformed into the building now known today as Complexe Les Ailes.

One of its most striking architectural features is a breathtaking glass roof, which lets an abundance of natural light spill into the nine-story atrium and lush indoor garden. The building is easily accessible from Montreal’s major commercial thoroughfares, the famed "underground city" and the McGill metro station.

Complexe Les Ailes also houses Montreal’s only SAQ Signature, extremely popular with local and visiting wine enthusiasts. This prestigious banner from the Société des alcools du Québec is a destination unto itself, boasting a number of exceptional vintages worthy of the most discerning collector.

There are also many other services available at Complexe Les Ailes, including a postal outlet, a foreign exchange counter and a Jean Coutu pharmacy.

For more information on our retailers or the downtown shopping scene, go to the website at: www.complexelesailes.com 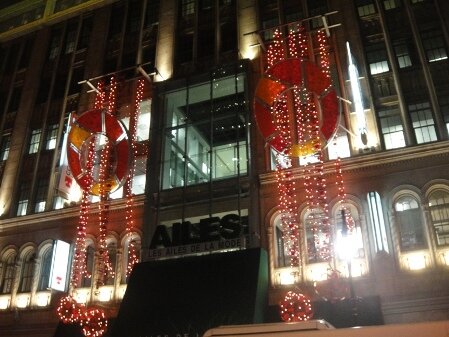