University Street is a 2.1 km (1.3 mi) long street in downtown Montreal linking Pines Avenue in the North, on the slopes of Mount Royal and Notre-Dame Street in the south part of the city of Montreal.

The street is a prolongation of Highway Bonaventure (Highway 10) and it ends at the Royal Victoria Hospital and the Montreal Neurological Institute.

McGill University campus borders the street at the northern end and several historical buildings are located on its southern portion, including Place Ville Marie, Place Bonaventure, Tour Telus and the headquarters of the ICAO. At its southern end, University Street forms the western boundary of the Montreal Quartier international. A colonnade of pillars encasing a stylized representation of the flags of the world was built there in the XXth Century.

This street was open in 1842, on the land donated to the city by the descendants of Sir Thomas Phillips, a merchant and an entrepreneur. At the time, University Street linked Sherbrooke Street and Notre-Dame Street. There was a path which continued to McGill University, thus the street got its name. Later, in the beginning of the XXth Century, the sector to the Pines Avenue was open. 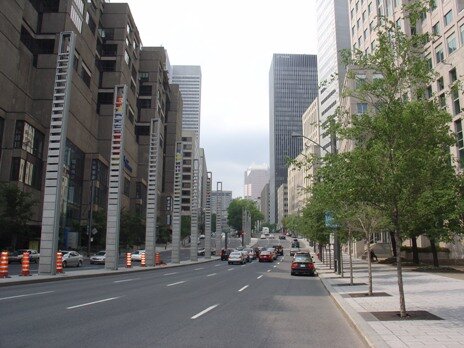