Joe Beef’s may be low, it is certainly dirty on the cellar and ground floors. And the value of such a place to the city may be questioned, but let one thing be remembered – many a tired head has here found rest; many a hungry mouth has here been filled, surely, this charity will cover a multitude of sins (Unknown).

A canteen keeper in the British army in the 1850s, Charles Joe Beef McKiernan was assigned to the military canteen on St.Helen Island (île Sainte-Hélène) en 1864 until he was discharged. He then opened Joe Beef’s Canteen, a tavern near Bonsecours Market that later moved to the corner of de la Commune and de Callière Streets in 1875. Bold, generous and flamboyant, the Irish immigrant quickly became the most famous tavern owner in Montreal.

Hundreds of longshoreman, day labourers and seamen came to the canteen to drink and have lunch. For 10 cents, the wealthier clients had steak and onions, while the poorer patrons received a bowl of soup and some bread. The eccentric Joe Beef even kept a menagerie of wild animals in the cellar to entertain guests. 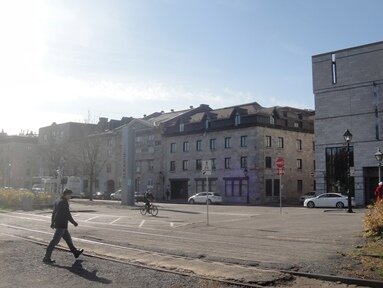 At this corner of de la Commune and de Calliere Streets, the Joe Beef's Tavern was located. Photo : © ProvinceQuebec.com