The plaza on Place des Arts is the home of the most important events during several musical festivals, including the Montreal International Jazz Festival and Montreal Francofolies, a festival of French-speaking song artists.

This plaza is located in the eastern part of the city’s downtown, between Ste-Catherine and de Maisonneuve St-Urbain and Jeanne-Mance streets.

Place des Arts was built as part of a project to expand the downtown core eastward from the concentration of business and financial activity in the centre-west part of Montreal and it was inaugurated in 1963. 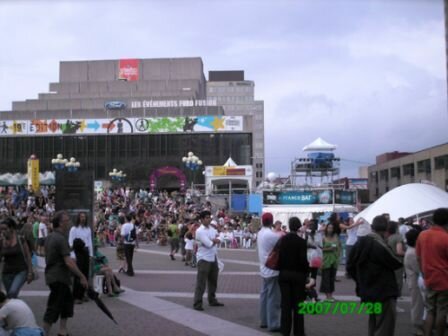 Shops, services, and a large esplanade decorated with fountains and water cascades are also part of the Place des Arts. The site  is decorated with examples of public art. The facilities are connected by an underground mall – part of the Underground city - linked to Place-des-Arts metro station and the Desjardins Complex.