The McTavish reservoir is located just above McGill University's campus, near the Mount Royal.

It's one of the primary holding tanks and distribution points for the city of Montreal's water supply. It is 37 million gallons of water nestled 26 feet deep into the side of the mountain.

Originally completed in 1856, the McTavish reservoir was an open-air reservoir with a capacity of 13.5 million gallons of water. It the 1930ies, it has been renovated to its current size and is now fully underground, covered by a grass field.

The reservoir is accompanied by the castle-like pump house which was built in 1932. It contains twelve massive pumps that extract water from the St. Laurence River about three km from the site. The pump house is fully automated, and unmanned. The tank walls are made of concrete and lined with lamps, while the walls that make up the perimeter are roughly-cut stone like those of a cave.

The first six pumps were installed in 1932. In 1946 there was an addition to the pump house which allows for a greater pumping capacity, with 6 more pumps. In that occasion, major restoration work was done on the reservoir, subdividing it into six tanks to facilitate maintenance. Ten years later, in 1957 the reservoir has been covered and the old pump house as well as the new one coexist.

Visitors can not enter inside there without authorization. 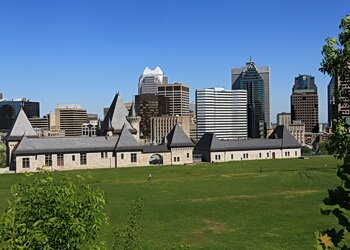