Getting Around in Montreal

Getting Around in Montreal

Getting Around in Montreal

Montreal’s present-day downtown area is rather long, but it’s narrow.

The area stretches about seven kilometres or about four miles from Berri-Uquam Metro station (subway) area on the east to Atwater Avenue on the west. From south to north, it spreads about five long blocks from Rene-Levesque Boulevard to Sherbrooke Street.

Anyway, it’s a very dense area. Some bars do not close until 3 a.m., people cruise the streets and traffic jams are not unusual, they do not last too long time, though. St-Laurent Boulevard divides Montreal into East and West. For example, you can see 100 Sherbrooke Street E (for East) and 100 Sherbrooke Street W (for West).

On north-south streets building numbers increase as people go north. In this case, even numbers are on the left hand-side. However, the points of the compass are used for practical convenience. They do not reflect the real geographic orientation of the street grid, so if you are walking up a north-south street, you can see the sun set just ahead. Montreal has an excellent subway and bus system. Public transportation shuts down between 1 a.m. and 5 a.m., but a few major bus routes run throughout the night.

You can call 514-AUTOBUS for help. Buses must be boarded with exact change or a ticket. Transfers to another bus or subway are free, but transfer tickets must be obtained at the moment you pay the fare.

To get a taxi, you can flag one at the curb or phone for pickup at the door.

Finally, if you are taking a walking tour, jus go slowly, indulgently and stop to enjoy the view along the way. 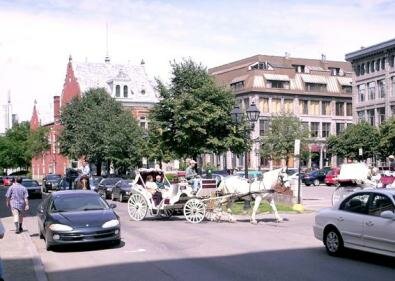