In 1979, Lea Vivot installed the Lovers’ Bench in a Toronto shopping mail. It was her first major work in North America. The sculpture shocked some of the mail’s patrons, which led to the decision to have it removed. It was then installed in Montreal at the Dominion Gallery, on Sherbrooke Street West, which is located near the Museum of Fine Arts.

The sculpture was moved to New York in 1985 after it had been bought by Abraham Hirschfeld, a New York businessman and art collector. Mr. Hirschfeld, who had lived in Montreal at the end of the 1950s, wished to thank Canadians for their hospitality. He asked Vivot to produce a second version of her work and offered a copy to the City of Montreal, which has been installed at the Botanical Garden since 1987.

The scale of The Lover’s Bench is somewhat larger than life, which is characteristic of Vivot’s works.  Her subjects’ massive appearance makes them seem more impressive. Two lovers caress and hold one another, while a woman sits beside them, yawning and leaning against the man. In order to increase the effect this piece would have on people, the artist chose to emphasize actions rather than details: the generic faces and bodies would be unrecognizable in an ordinary context, aside from the fact that her subjects are young and well built.

There is a contrast between the couple’s bliss and the woman’s loneliness: the lovers’ intensity conflicts with the lonely woman’s boredom as she turns away from them. In order to highlight this difference, the woman is wearing a skirt, whereas the lovers are nude. She is outside paradise, as if she were a disillusioned Eve.

The sculpture follows in a statuary tradition that began in the XIXth century. The bench and graffiti are an integral part of the piece, thus giving it a modern touch. Written on the work are reflections on love, such as “Holding you becomes a fragment of eternity in an immortal structure”, “Amor con la pasion para siempre”, “I need to see you with my touch” and “Memories of tears on fire, unspoken words of love”.

For the artist, the creative process begins with a sensation, which is followed by inspiration and, finally, an idea from which the sculpture is born.

Lea Vivot was born in 1950 in Sumperk, Czechoslovakia. She is a graduate of the Ontario College of Art and has also studied at the Brera Academy in Milan and the Art Student’s League in New York. She now lives and works in Kleinburg, Ontario.

Since the beginning of her career, Lea Vivot has focused on representing human subjects, particularly mothers and children, as family is of fundamental value to her. From the time her career began in the 1970s, she has specialized in creating figurative bronze statues. Through her work, the artist explores the themes of family, the passage of time, love and interpersonal communication. 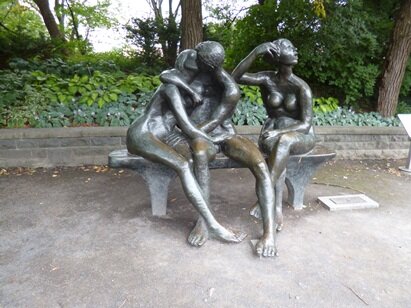 I created a piece that is a tribute to life and society. Love and loneliness are a part of society and The Lovers’ Bench combines them both. At one point or another in our lives, we all sit on this bench”. Photo: © ProvinceQuebec.com