Mile End is a well-known neighbourhood in the city of Montreal. It is part of the Plateau-Mont-Royal Borough, but the locals residents make a distinction between Mile End, a highly multicultural district with a mix of Anglophone and Francophone populations, and the eastern parts of the Plateau borough, which have primarily Francophone populations.

Contrary to popular belief, the limits of the neigborhood are not a mile away from any official marker of Montreal City. It is, however, a mile north along St-Lawrence Road (St-Laurent Boulevard) from Sherbrooke Street.

Mile End was a first important crossroads north of the tollgate located at Montreal’s limits of 1792.  As early as 1815, there was a Mile End Hotel and tavern, frequented by notables. The transcontinental railway gave Mile End its first growth spurt and separate identity. In 1876 the Quebec, Montreal, Ottawa and Occidental Railway came slicing through the area and Mile End Station was established in 1878 on the east side of Saint-Laurent Road, near what is now the intersection of Bernard Street.

In fact, for many years, Mile End has been known for its Anglophone culture and as an artistic neighbourhood, home to artists, musicians, writers and filmmakers. Mile End was described in several music magazines as the heart of the independent music scene in Montreal. Visitors will find many art galleries, designers' workshops, boutiques and cafés everywhere and some of the most important computer software houses (such as Discreet Logic and Ubisoft) made a mark on the area in the early 1990s.

Perhaps the most recognizable architectural symbol of Mile End is the Church of St. Michael and St. Anthony, on St-Viateur Street at the corner of St-Urbain. The church was built for a largely Irish Catholic community, as expressed by omnipresent shamrock motifs; yet the overall style of the building borrows more from the Byzantine than Western architectural traditions. Even more striking, the church has a slender tower that resembles a minaret. The building is now shared with the Polish Catholic parish of St. Anthony and masses are given in several languages. 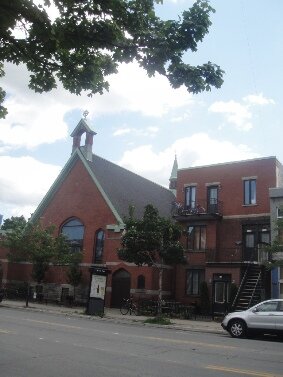 Parts of Mile End were heavily industrialized in the first half of the century because of the proximity of transportation by rail. Much of Mile End served as the heart of Montreal's garment district for many decades.

The famous writer Mordecai Richler was born and grew up on Saint-Urbain Street here, and described the neighbourhood in his novels. 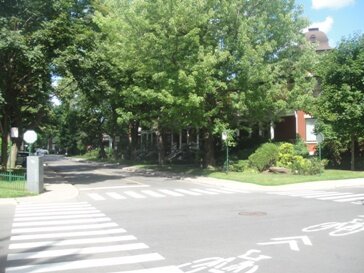