In the beginning of the 19th century Montreal and Quebec City were the only real urban centres in Canada, but both had modest populations around 10,000 each.

At the end of the Napoleonic wars Montreal was a city without large public buildings, and very few estates were over two stories. The most important church, the Notre Dame (not the present one, of course) was small and unimpressive.

Even in the first decades of the 19th century, Montreal’s future was not bright, as the city was losing the fur trade and its political influence to the Hudson’s Bay Company and the Canadian timber trade was concentrated almost entirely in Quebec City. However, Montreal developed, and growth was mainly due to the city’s expanding industries that provided work for both the skilled and unskilled.

Gradually, the city became the only Canadian metropolis. Construction of the first railway in Canada, the Grand Trunk Railway and the building of the Victoria Bridge at Montreal gave the city the only bridge over the St. Lawrence, and accentuated its dominance of railway networks.

For the end of the 19th century Montreal and its suburbs produced over 55 percent of the total value of Canada’s manufactured goods, while Quebec City accounted for 10 percent. Montreal’s metropolitan dominance was enhanced by developing waterpower, canal and rail facilities, and its concentration of both industrial and financial capital.

The Montreal area accounted for 40 percent of Canadian production in the food and beverage sector, as well as in the production of transport equipment. 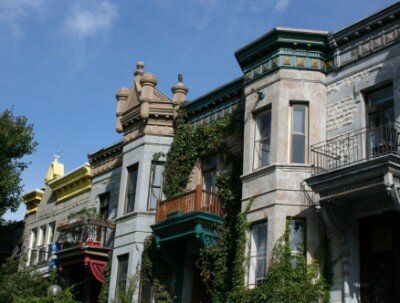