The Hudson's Bay Company (French: Compagnie de la Baie d'Hudson), abbreviated HBC, is the oldest commercial business in North America and is one of the oldest in the world. Founded by King Charles II, the Hudson’s Bay Company greatly contributed to building Canada as a nation.

Two resourceful Frenchmen, Radisson and des Groseilliers, discovered a wealth of fur in the north and west of the Great Lakes accessible only via Hudson Bay. The French Secretary of State, Jean-Baptiste Colbert, was promoting farming in the colony and was opposed to exploration and trapping.

So Radisson and des Groseilliers approached a group of businessmen in Boston, Massachusetts, to seek financing of their explorations. The Bostonian businessmen saw the plan's potential and brought the two French explorers to England to seek financing. In 1670, Prince Rupert, cousin of King Charles II, used his connections to grant the lands of the Hudson Bay watershed to "the Governor and Company of Adventurers of England trading into Hudson Bay." Hbcs coat of arms shows the old Latin motto pro pelle cutem: a skin for a skin.

HBC established a few forts and posts around the shores of James and Hudson Bays where Natives brought furs to barter for manufactured. By the late 18th century, competition forced Hbc to expand into the interior and to build posts along the great river that would later become cities of Winnipeg, Calgary, and Edmonton. This region constitutes 3.9 million km² (1.5 mln mi²) in the drainage basin of Hudson Bay, one third the area of modern-day Canada stretching into the north central United States. Called "factories" ("factor", a person acting as a mercantile agent, did business from there), those posts operated in the manner of the Dutch fur trading operations in New Netherland.

After war broke out in Europe between France and England in the 1680s, the two nations regularly sent expeditions to raid each other's fur trading posts. In March 1686, the French sent a raiding party, with Pierre Le Moyne d'Iberville in command, to capture the company's posts along James Bay. On the way to the fort, he defeated three ships of the Royal Navy in the Battle of the Bay, the largest naval battle in the history of the North American Arctic. Pretending to be a much larger army, D'Iberville's captured York Factory, which changed hands several times in the next decade. It was finally ceded permanently to the Kingdom of Great Britain in the 1713 Treaty of Utrecht. Later, the company rebuilt York Factory as a brick star fort at the mouth of the nearby Hayes River, in Manitoba.

In its trade with native peoples, the company offered wool blankets, called Hudson's Bay point blankets, in exchange for the beaver pelts trapped by native hunters. An important part of the Hudson’s Bay Company, the Aboriginal women, who made and mended clothing much faster than Hbc employees, brought success to the Hudson’s Bay Company. They were often married to the Hbc employees, formally or informally. These marriages were known as a la facon du pays (after the custom of the country). These country wives played an active role in the fur trade and provided economic ties to the Aboriginal community. The natural alliance that came with marriage brought in much more revenue for the Hbc. Aboriginal women were also able to resolve many disputes between the Aboriginal communities and Europeans acting as mediators.

In 1821, Hbc merged with its most successful rival, the North West Company, based in Montreal. The resulting commercial enterprise operated across the continent. Its trade covered 7 770 000 km² (3,000,000 mi²) and it had 1,500 contract employees. Throughout the 1820s and 1830s, the company controlled nearly all trading operations in the Pacific Northwest from its headquarters at Fort Vancouver on the Columbia River. Between 1820 and 1870, Hbc issued its own paper money: the notes, denominated in pounds sterling, printed in London.

In 1849, Sayer, a Métis trapper and trader, was accused of the illegal trading of furs and brought to trial by Hbc officials. A crowd of armed Métis men led by Louis Riel Sr. gathered outside the courtroom to support their Métis brother with the cry "Le commerce est libre! Le commerce est libre!" ("Trade is free! Trade is free!"). Although Sayer was found guilty, the Hbc could no longer use the courts to enforce their monopoly on the settlers of Red River.

In 1870 the trade monopoly was abolished and trade in the region was opened to any entrepreneur. The company relinquished its ownership of Rupert's Land under the Rupert's Land Act of 1868 (the Deed of Surrender) enacted by the Parliament of the United Kingdom.

By the end of the 19th century the fur trade started losing importance. A new type of client came to Hbc: one that shopped with cash and not with skins. The Company's began transforming trading posts into stores with a wide variety of goods. Today the company is best known for its department stores throughout Canada.

Today, the only part of the company operation remaining is the Hudson's Bay Company Stores—trading posts that were established across northern Canada—in the form of department stores under the name The Bay. The first department store opened in Winnipeg, Manitoba in 1881 (this building is considered the flagship store). In 1912, Hbc began an aggressive modernization program founding the "original six" Hudson's Bay Company department stores in Victoria, Vancouver, Edmonton, Calgary, Saskatoon, and Winnipeg. Retail expansion across the country was achieved by a series of strategic acquisitions: Cairns in Saskatoon (1921), Morgan's in Montreal, Ottawa, and Toronto (1960), and Freiman's in Ottawa (1972).

In 1970, on the 300th birthday of the company, Queen Elizabeth granted a new charter to the company revoking most of the provisions of the original charter and formally transferring the company from the United Kingdom to Canada, where a new headquarters was established in Winnipeg, Manitoba. 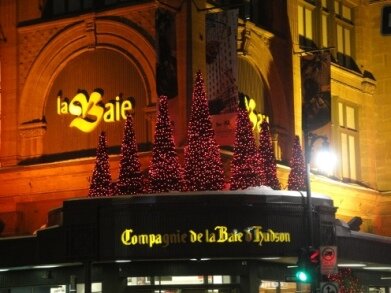 As the company expanded into the east, head office functions were moved to Toronto, Ontario, Canada. Today there are currently four retail divisions: The Bay (an estimated 34.7% of its 2003 $7.4 billion revenues), Zellers(59.7%), Home Outfitters (reported figures for The Bay also include the Home Outfitters chain of stores), and financial services (4.5%).

The 99 Bay stores are the traditional and best-known face of Hbc aiming to offer a full range of goods and services of a department store. The company also operates 45 Home Outfitter stores, with the popular bed and bath segment. Zellers stores operate in the mass merchandise category and offers exclusive brands (about one-fifth of its 312 stores are former K-Mart Canada stores).

The company's "HBC Foundation" was created in 2004 focusing on three areas: healthy families, wellness, and education.

In 2007, the Hudson's Bay Company Archives became part of the United Nations Memory of the World project, under UNESCO. The records covered HBC history from the founding of the company in 1670. The records contained business transactions, medical records, personal journals of officials, inventories, company reports, etc.