Remembrance Day, also called Veterans Day, Poppy Day or Memorial Day is a memorial day observed in Canada since the end of the First World War to remember all the Canadians who died in the line of duty in the throes of war and peacekeeping efforts. This day was designated by King George V in 1919 to be observed on 11 November to recall the end of hostilities of World War I on that date in 1918. The memorial evolved out of Armistice Day, which was held on the grounds of Buckingham Palace in London. Remembrance Day in Quebec is also referred to as Jour du Souvenir.

In 1918, hostilities formally ended at the 11th hour of the 11th day of the 11th month, in accordance with the armistice signed by representatives of Germany and the Entente, even when the First World War officially ended with the signing of the Treaty of Versailles on 28 June 1919.

Since 1919, honoring the men and women who sacrificed their well-being to protect ours, the 11th hour of the 11th day of the 11th month is recognized in silence across Canada. In addition to parades and commemorations across cities and small towns, all Canadian flags on federal government buildings are flown at half-mast and schools across the country observe at least a moment of silence at 11 a.m.

Many people wear artificial poppies on their clothes in the weeks before Remembrance Day. The red remembrance poppy has become a familiar emblem of Remembrance Day due to the poem In Flanders Fields. These poppies bloomed across some of the worst battlefields of Flanders, and their brilliant red colour became a symbol for the blood spilled in any war. On November 11, special church services are organized. These often include the playing of "The Last Post", a reading of the fourth verse of the Ode of Remembrance and two minutes silence at 11:00 (or 11am). After the service, wreaths are laid at local war memorials.

The official Canadian national ceremonies are held at the National War Memorial in Ottawa. A service is held and wreaths are laid by armed services representatives. In May 2000 the remains of a Canadian soldier who died in France in World War I, but was never been identified, were laid in the Tomb of the Unknown Soldier at the National War Memorial.

Since then, people have laid poppies, letters and photographs on the tomb. Similar services and events are held throughout Canada. Some schools that are open on Remembrance Day hold special assemblies, lessons and presentations on armed conflicts and those who died in them.

The federal government recognizes Remembrance Day in the Holidays Act as a national holiday, but not all provinces treat it as a paid statutory holiday. Its status varies by province.

Remembrance Day is not a statutory holiday in Quebec, although corporations that are federally registered may make the day a full holiday, or instead, designate a provincially recognized holiday on a different day. When Remembrance Day falls on a Sunday or Saturday that is a non-working day, workers are entitled to a holiday with pay on the working day immediately preceding or following the general holiday.

In Flanders fields the poppies blow
Between the crosses, row on row,
That mark our place; and in the sky
The larks, still bravely singing, fly
Scarce heard amid the guns below.

We are the Dead. Short days ago
We lived, felt dawn, saw sunset glow,
Loved and were loved, and now we lie
In Flanders fields.

Take up our quarrel with the foe:
To you from failing hands we throw
The torch; be yours to hold it high.
If ye break faith with us who die
We shall not sleep, though poppies grow
In Flanders fields. 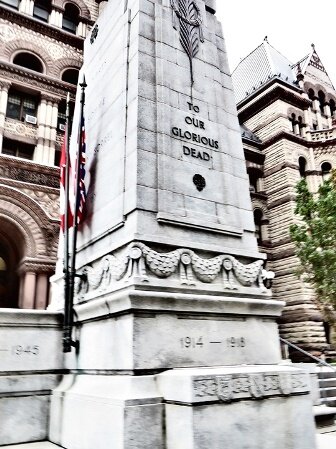 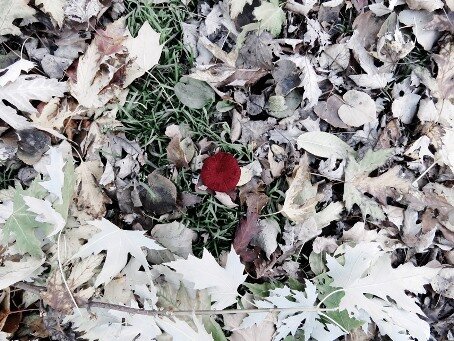 These poppies bloomed across some of the worst battlefields of Flanders. Photo : © Megan Jorgensen 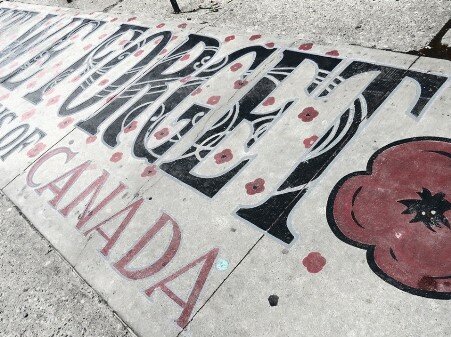 Lest We Forget. Photo : © Megan Jorgensen 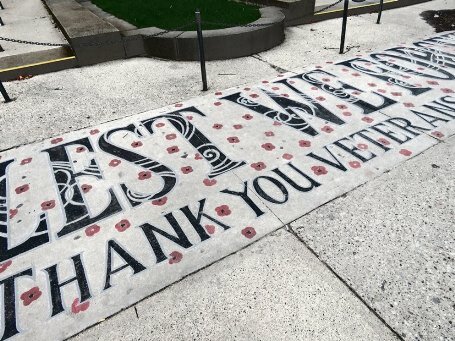