The alcoholic beverage industry rakes in each year billions of dollars. Jernigan (2009) set out to investigate the globalized sector of the industry through market research and other sources of information. The author laments the lack of health care associated queries to find out what the long-term effects of public exposure to liquor glamorizing is. The three best sellers are beer, wine and distilled spirits. Marketing, advertising and brand loyalty appear to play broad roles in worldwide alcohol consumption. Some social events, such as the Oktoberfest festival, are associated with drinking. The industry has many sectors: different subcontractors often do the production, the packaging, the distribution and the marketing.

Alcohol is achieved by the fermentation of an organism similar to culinary use yeast. The result produces intoxicating effects, known since the early years of the human civilization. Thus, the Ancient Greeks celebrated inebriation with Dionysus’ day. He was the god of wine and festivity.

Alcohol prohibiting laws have once been implemented in North America and Scandinavia, but they were later repelled. The rationale behind them was that sobriety impedes crime, but the consequences were not always as preconceived. Petri et al. (2010) examined the alcohol industry in Scotland. Intoxication causes harm socially and that is why governments try to make it less available, such as in Scotland (Petrie et al. 2007). The problem with such legislation and its effects, is that it is both time-consuming and financially expensive to carry out the kind of research needed to answer the questions of interest, one such study may cost 150,000 to 200,000 British pounds sterling. Customary regulations are that alcoholic beverages can be purchased at only certain stores, establishments must obtain permits to sell and serve alcohol, and there are curfews as to at what time and after which age one can buy the product, and so on.

The catastrophic and tragic consequences of drunk driving are so devastating, that a reiteration of all the reasons why driving under the influence is a monstrous and abhorrent crime seems unnecessary. If all other arrangements, such as getting a ride with a friend or taking a cab failed, then there exist special agencies providing the service of picking people up and driving them home in their own car.

The AA (Alcoholics Anonymous) is a non-judgmental organization designed to help recovering alcoholics. Alcoholism is listed as one of the substance abuse diseases in the DSM-IV-TR manual. Other pathologies, such as compulsive gambling, also have the potential to be remedied.

Closer to out theme, Quebec was unaffected by the dry laws of the beginning of the last century. In the province, tolerance and mistrust of alcohol are the two predominant alternating ways of looking at liquor consumption. The problem stems from the negative consequences that alcohol abuse fosters in society: poisoning, crime, disease, poverty, etc. Still, the General Assembly of Educ’Alcool Members adapted document states that despite 80% of the local population regularly or occasionally indulging, related dependence and excess difficulties directly touch only a small minority.

Through powerful campaigns and television advertisements, the Belle Province’s slogan has become “la modération a bien meilleur goût”, i.e. “moderation is always in good taste”, praising restraint in relation to alcoholic beverages. In addition, Educ’Alcool relate about the code of ethics of the industry. Educ’Alcool is a Quebec organization that permits multiple actors to educate and promote responsible drinking. Thus, the Code of Ethics of the Alcoholic Beverage Industry in Quebec states that while the substance is indeed a psychoactive agent, and abuse causes much damage to the perpetrator’s entourage and self, there are some positive aspects such as the pleasure and relaxedness that the phrase “drinks on me!” causes at most parties. Also, the point is raised that it is in the best interests of the industry’s major suppliers to attract quality, but not quantity, consumers.

Alcohol distribution is heavily regulated. In addition to time cut-offs, establishments must get (distinct) permits for the right to sell alcohol or to serve it on the premises. As in most countries of the world, minors are forbidden from entering clubs, bars and the like; underage drinking is a serious issue. However, the age itself varies. In Quebec, majority age is 18 years old, in Ontario it is 19, while in the US it is 21. Interestingly, rumour has it, that in the state of Massachusetts, a minor can be charged with internal possession if found drunk.

But to get back to Quebec, the SAQ (see below) alone had a revenue of two and a half billion Canadian dollars in 2010, while employing over 7000 people. According to the government owned institution’s annual report, Quebeckers prefer, and thus buy, wine (77.9%), spirits (14.8%), coolers (5.4%), beer (1.5%) and ciders & miscellaneous products (0.4%). Further, wines are liked to different degrees: wine sales consisted of 73% for red, 23% for white and 4% for rosé. By the way, some people believe that a glass of red wine per day is good for one’s health due to the antioxidants found in the skin of red grapes. Whether it is true or just an excuse for ingestion, a non-alcoholic path to the same destination is enjoying (red) grape juice or just eating the berries. Further, the same report says that sales volume has been growing steadily over the five years preceding the paper’s issuance. Additionally, Statistique Canada portrays Quebeckers as average drinkers; the highest intake per person goes to the Yukon Territory (13 litres), the lowest to New Brunswick (7.1 litres), while Quebec is somewhere in the middle with 8.3 litres (data for time period 2008-2009).

Clearly, internationally and domestically, the alcohol business is big bucks. A closely related business is the food industry. Truly, such multinational corporations as McDonalds apparently even have the power to “impinge themselves upon the daily consciousness of the average person form Jamaica to Japan” (Alleney, 2009; p. 76).

Several locations throughout the province 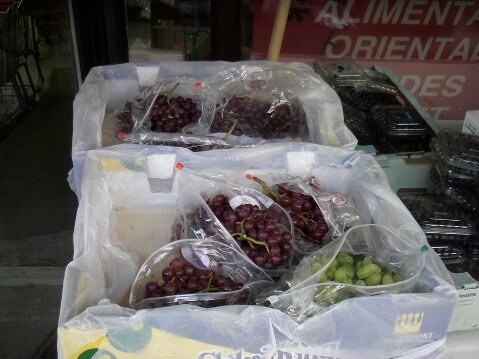 “The vine bears three kinds of grapes: the first of pleasure, the second of intoxication, the third of disgust” Diogenes (Ancient Greek Philosopher; Founder of Cynicism 412 BC-323 BC). Photo: © Provincequebec.com