Facts from the past

Facts from the past

Curious facts from the past

The most colossal understatement in History: François Marie Voltaire (1694-17778), famed French writer and philosopher, who on learning that Canada had been taken from France by Britain, said it was no great loss after all, Canada was only “a few acres of snow”.

Moustaches were worn by almost all of the early members of the North West mounted police (R.C.M.P.). The reason, as given by an inspector of the time, was that the men believed shading the upper lip weakened the eyes.

A horrible hobbler was used in jails and penitentiaries in the 19th century. Known as the Oregon boot it weighed 4-5 kg around its top was a circular 6-8 kg weight that locked around a convict’s leg.

It’s not that long ago that policemen in Canada’s large cities wore uniforms the same as those of British bobbies.

Queen Victoria: Strange as it may seem in these days of instant communications, it was more than a month after the death of William IV, in 1837 before Canada learned its sovereign was no longer William, but Victoria.

The man who had a premonition of his own death: Recorded only by the name of Carpenter, he was with a party of Overlanders on their way to the British Columbia gold fields in 1862, when they reached turbulent rapids in the Fraser River. He hung his coat on a tree before heading into the rapids where he was lost in the swirling water. Later a note was found in his coat pocket. It read: “arrived this day at the canyon at 10a.m. and drowned running the canoe down. Good keep my poor wife.

The first motor vehicle license plates in Canada (issued by Ontario) in 1903 were made of patent leather.

Mud in the eye of officialdom. In 1856, one John Butt arrived in Victoria, British Columbia, and took up the job of cleaning streets under separate contracts. Some time later officials discovered they were being conned. Butt’s modus operandi consisted of loading his cart on Government Street, then driving around the corner to Yates Street, where he sully let the mud and filth ooze out. Returning with more loads he disposed of them the same way. After clearing up Government Street he would obtain a contract for the mud he had deposited on Yates Street, than cart it back to Government Street and so on…

How prehistoric wealth was found: In pre-confederation days, prospectors crossing Northern Ontario were puzzled by the fact than their compasses spun crazily in the area of present day Sudbury. The mystery was solved in the 1880th when construction gangs were dynamiting their way through pre-Cambrian rock to lay a road bed for the C.R.R. The found nickel deposits so vast in scope that it staggered the imagination of the world.

Uniformity of weights and measures throughout Canada was first provided by Act of Parliament in 1873. 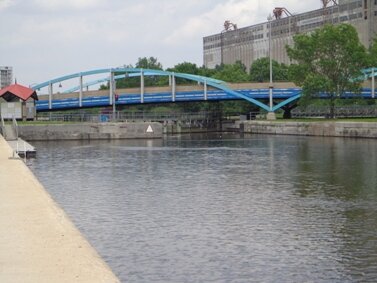 A bridge over Lachin Canal. Source of the photo : © Histoire-du-Québec.ca

A mercurial money-market: During the early days of Alberta’s oil industry, every nock and cranny in downtown Calgary was adapted for office space for the sale of new stock issues. At the end of each booming business day money had to be carted to the banks in big cardboard boxes and garbage cans.

An early snowmobile in Manitoba, a converted model “T” ran for a transportation company between-the pas and Flin Flon in 1928.

Rural telephone systems on the Prairies were in operation years before radio and were used as a form of pastime. Being party lines it was taken for granted that everyone on the line listened in. They were invaluable as instruments of instant communication. One long extended ring was the signal for everyone to answer by the method news of public meetings, dances, auction sales, auction sales, deaths, fires, etc. was passed along.

The sewing machine was the first labor-saving device to come into the home. A popular brand - Singer - came to Canada in 1867 and with it came the first installment buying. Its inventor startled the world by selling his machines for $5 down 3$ a month with very few losses.

An eye for an eye and en ear for debt in the rough and tumble period between the American Revolution and the War of 1812: it was a custom to cut off an ear of a person who failed to honor a debt to another.

Gasoline was, at one time, thrown away. Before the development of the internal combustion engine and the motor car there was no use for gasoline. You could have all the gas you wanted if you would haul it away from the refineries.

In the early days, the motoring roads were bad, but they became deplorable in springtime. At one time all motor travel was banned for 40 days and 40 nights every spring in Nova Scotia – till the frost came out of the Ground.

The Canadian chess association was formed in 1872 in Hamilton, Ontario.

The Fathers of Confederation really wanted to call the nation they founded the Kingdom of Canada. But because the USA, nearly 100 years after their war against King George III, was still sensitive to the word kingdom the fathers substituted the word Dominion.

The town that moved: In the 1940’s the town of Lynn Lake wasn’t. It was the town of Sherridon, 264 km to the South in the Frozen Muskeg land of Northernn Manitoba. Sherridon was a mining town, but the ore ran out. Lynn Lake had nickel ore – millions of tons of it, but no one to get it out. So they jacked up Sherridon, put in on sleds and winter-hauled it by tractor, the 264 km to Lynn Lake.

Gold in Nova Scotia: Stories about the production of gold in Nova Scotia (first discovered the same year, 1849, as the famous California Gold Rush) are overshadowed by bigger strikes in other provinces and territories. A man named John Campbell was the first to pan gold along the shores of Halifax County. He and the hundreds of gold seekers who followed him never made fortunes. Yet Nova Scotia production per man and gold yield per ton was better than that of either California or Australia.

No place for weaklings: Thousands of gold seekers sought to reach the Klondike during the Yukon gold rush. To climb the treacherous mountain passes was difficult enough. But to help ensure their survival, the mounted police wouldn’t allow them to cross the border unless each man transported a full ton of supplies.

Vancouver  - previously called Gastown, was almost entirely levelled by fire the year it was incorporated, 1886.

Huckleberry Finn, the hero of Mark Twain’s famous novel “The adventures of Huckleberry Finn” is one of the most beloved characters in American Folklore. U.S. publishers and reviewers rejected it outright, and it was only after it had been published in Canada that it was finally accepted in the USA.

The Yukon Ice Worm cocktail: During the Yukon gold rush, and Greenhorn visiting the Malmute saloon, who bragged about his accomplishments as a sourdough was asking to be taken down a peg or two. This was done by having him drink a specially prepared cocktail, the chief ingredient of which was an Ice Worm. No Greenhorn was ever told the “worm” was a food-colored inch of spaghetti with ink dot eyes.

A copy of Dickens’ Pickwick Papers was found in a garbage dump, and returned to the Kingston, Ontario, Public Library 42 years overdue. The unpaid fine is calculated in 604.00$.

In early Upper Canada theft of a Geranium plant was punishable by five years in prison.

Amery Girod committed suicide in 1837. Until his death suicides were denied a Christian burial. And their ultimate fate was interment at a busy crossroads. Girod was the last recorded suicide to meet this fate, and he was buried at the now very busy corner of guy and Sherbrooke streets in Montreal.

Fuel for the campfires of early travelers across the Canadian prairies was Buffalo manure. Buffalo chips or cow’s wood, as some called it, was often the only fuel available on the treeless plains.

A dangerous occupation was that of fireman on the early trains, they had to frequently crawl along the running board as the engine thundered on its way, to place grease in all the bearings. The work was especially dangerous in freezing or other kinds of inclement weather.

Goat Island which separates the Canadian and American falls at Niagara derived its name from the fact that its first owner John Stedman used it to pasture a goat.

The luck of the draw: When the United Empire loyalists arrived in Upper Canada (Ontario) they were given land by a fair and democratic process. They drew their lot numbers from a hat held by a crown administrator.

Lumbering got its start in 1765, when Mr. Davidson settled on the banks of the Miramichi River in New Brunswick. He sold masts to the Royal Navy, 30 m high, 1 m in diameter, at $680 each.

Sod houses were often the first homes of many early prairie settlers. A typical 500 home used 45 tonnes of sod in its construction.

A black flag was raised on the dome of Montreal’s somber Bordeaux jail each time an execution took place.

“Riding a man upon a rail” was a justice handed out by mid-19th century country people. It fell on those who infringed regional or moral laws. The culprit was stripped of clothing and covered with pine tar, rolled in feathers, then placed astride a fence rail. Thus, tarred and feathered it was understood he would now leave town.

The world’s biggest cheese. Full scale production of dairy products – cheese and butter – began in the 1860’s. By 1880 an amusing development was the competition in making large cheeses. The grand champion was called the Canadian Mite, Made at Perth, Ontario, it weighed 9,9 tonnes and with a circumference of 8,4 metres it stood 1,8 metres in height.

Ancient seeds of the Arctic Lupin found in frozen silt at Miller Creek the Yukon Territory, in July 1954, were established to be over 10,000 years old.

Paper work: The Festive season Canadians will use over 100 000 of wrapping paper.

The North Pole has just one sunrise – March 21 and one sunset September 21 each year.

Northern floral abundance: Herschel  Island, off the Yukon coast, though only a silt deposit on a foundation of Glacial Age ice, has 370 varieties of wild flowers.

The steam iron is not the modern invention many people think it to be. From 1860 on this kind of beauty was in use in Canada. It was charcoal-fired and worked on the same principle as its present day electric descendant.

Itinerant shoemakers traveled from house to house before settlements were developed in Upper Canada (Ontario). Carrying the tools of their trade they boarded with a family until all its shoes were repaired or new ones made, and then moved on to the next house for a repeat performance.

The manly art of self-defence: Fist fights occurred between individuals in all areas of Early Canada. Scores were settled by military personnel, voyageurs, lumberjacks, miners, etc. Occasionally a formal match was arranged and the participants were veritable gladiators. They fought without gloves in rounds of 3 minutes (some matches lasted for 72 rounds) and only a knockout ended a contest. The Marquis of Queensbury rules were introduced in 1867 – with a limit of 15 rounds.