I Remember:  but what exactly?

Visitors to Quebec wonder about the meaning of the motto on the provincial license plates. In 1978, what used to be La belle province - The Beautiful Province, became Je me souviens, meaning I Remember.

The story goes back to 1883, when the architect Eugene-Etienne Tache ordered the carving the motto Je me souviens below the Quebec’s coat of arms above the main entrance door of the Quebec Parliament. The true meaning of the motto has been debated ever since.
Taché did not leave any document revealing the intended meaning of the motto. His contemporaries interpreted its meaning as a declaration of the French Canadian nation remembering its past: the glories, the misfortunes, and the lessons.

Nowadays, the most widespread understanding of the motto is as follows: francophone Quebeckers cherish their French roots. Still, there are many theories and legends around the interpretation of these three words. 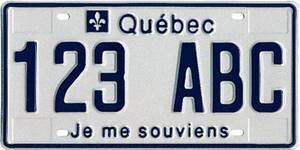 In 1978, Helene Paquet, the granddaughter of Eugene-Etienne Tache, wrote in response to an article “Car owners argue over motto” in The Monteal Star. Her letter, entitled “Je me souviens, just part of it”, clarifies that the famous phrase is the first line of a poem that reads as follows:

(I remember, than born under the lily, I grow under the rose - actually, the lily and the rose are the floral emblems of the kingdoms of France and England).

The poem is believed to be created by the same Eugene-Etienne Tache. He was allegedly going to use it on a monument that was never built. Still, this is just a hypothesis and the debates on the origin of the famous motto continue.