Trivia and Unknown Facts about Canada

Totem Poles are found on the North Pacific coast, among the Tsisian, the Haida and the Kwakiutl tribes. There are two types, Memorial Poles, used particularly by the Tsimshian, commemorated dead members of the family, and were set apart from houses. House poles (f.i. Haida Poles) were heraldic signs, symbolizing family ancestry and tribal traditions. These were erected in front of houses, the entrance to which was sometimes through a hole at the bottom.

The white man brought death: In 1781 nine of every ten members of the Chipewyans, at one time the largest Athapskan-speaking tribe of the Central Suarctic, died of smallpox – a white man disease.

Coiled Baskets: Made by interior Salish Indians (British Columbia), were so tightly woven they were used as cooking vessels.

Like many other Indian customs, the use of the basic bow and arrow is usually inaccurately portrayed. From the earliest sketches on down through many years of Hollywood extravaganzas Indians have been depicted shooting their bows in the classic stance of the European archers of the Middle Ages. For many years leading Indians like Chief Dan George of British Columbia have consistently pointed out that Indians held their bows horizontally – not vertically like Robin Hood.

If we did not as brother live, let us here as brothers lie - inscription over the entrance to the old graveyard for Indians and Europeans at La Ronge, Saskatchewan.

At Yellowknife North-Western Territories from mid-June to mid-July sunset and sunrise blend so that it is possible to read a paper out of doors at midnight.

Kelowna is the only city in British Columbia that has a coat-of-arms that is authentic: i.e. issued by the College of Heralds and signed by the kings-at-arms. The left supporter, a bear, represents the origin of the name Kelowna, the Aborigines name for grizzly bear.

A glass house shaped like a castle is the home of George Plumb, near Cowichan, British Columbia. The outside walls consist of over 200,000 empty bottles encased in concrete.

The Domesday Book. An authentic copy of this famous book (compiled in 1087) is in Fredericton, New Brunswick.

The world’s highest tides are found along the Bay of Fundy between Nova Scotia and New Brunswick.

The death penalty was imposed for 11 crimes in Canada in 1859, arson being one of the crimes in question.

Alert weather station was established in 1950. At the top of Ellesmere Island it is only 800 km from the North Pole. Here meteorologists make observations in the Upper Air several times a day by sending up hydrogen balloons that carry radio transmitters that signal conditions of wind and temperature. It is the furthest North permanent Human habitation in the world.

Halloween High Jinks. When Canada was still largely an agrarian nation, youthful exuberance surfaced on all Hallow’s eve no less than that expressed by modern youth. A favorite prank of those by-gone days was to place a neighboring farmer’s wagon on top of his barn. 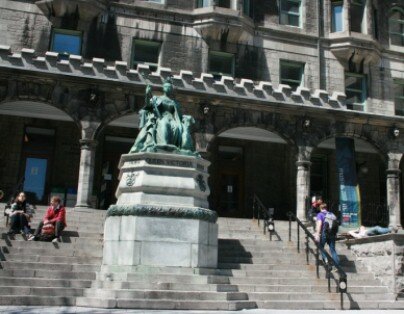