Stars as in Astro

Stars as in Astro

Stars as in Astro

Stars have captivated human attention since times immemorial; popular media phenomena Star Wars and cult-inspiring Star Trek are just two among many proofs (2 official ST conventions toured Montreal in the last 12 years). Further, astrology is the practice of attempting to foretell the future based on the position of the stars, as in the twelve horoscope signs that stem from the belief that a person born under a particular stellar arrangement has a predetermined destiny and personality.

JoJo Savard, a Quebec born television personality of the 1990s, was the first astrologer to gain public recognition in Canada. In the scientific realm, there are astronomy, astrobiology, astrochemistry and astrophysics. In Quebec, the most prominent are: astronomical professional endeavor Mont Mégantic Observatory (AstroLab of the National Park of Mount Megantic), the non-professional association FAAQ (Fédération des Astronomes Amateurs du Québec), and the astrophysical CRAQ (Centre of Research in Astrophysics of Quebec).

Due to the impossibility to place a massive gaseous object into empty space and watch it evolve for a million years, astrophysics and astronomy are observational and not experimental sciences. Although physics is indeed a science, debates nonetheless remain.

For example, Pluto has recently (circa 2008) lost its planetary status, due to the many “Plutos” in similar elliptical outer orbits. Eris, a planet larger than Pluto, has been discovered and it is expected that similar others will follow in the near future (the Hubble telescopes and the Voyager probes launched in the 1970s have advanced the field tremendously). Similarly, the Moon, essentially a rock, is larger than Pluto and due to the unusual, as compared to other planets, Earth-Satellite proportion, they could be considered as two planets. Our solar system is part of the Milky Way Galaxy, one star (the Sun) among billions of stars, among billions of galaxies.

The closest spiral galaxy to us is Andromeda; the two are expected to collide in billions of years to form a mega-galaxy, as is often the case elsewhere. 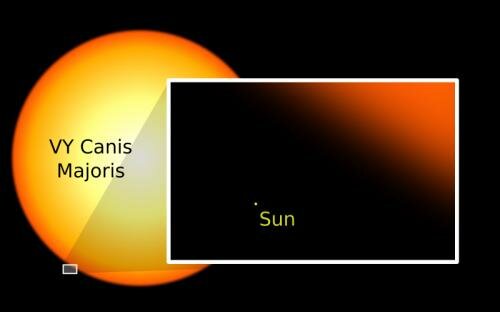 Now, this is much more impressive when actually drawn to scale, but the order of magnitude (non-exhaustive list) is as follows: Moon < Earth < Jupiter < Sun < Sirius < Arcturus  < Rigel < Antares < Betelgeuse < Binary Star VV Cephei < Vy Canis Majoris. Which of Betelgeuse or Antares is larger is a matter of argument, but both are the brightest visible red supergiants in Earth’s sky. Vy Canis Majoris, a red hypergiant located in the Canis Majoris constellation in our galaxy, is the most luminous and biggest star known to man. All entries in the above sentence including and following the Sun are stars.

The Sun is young; a middle aged star turns into a red giant, and a dying star becomes a white dwarf (extremely dense). After one tries to ponder just how enormous a star like Vy CM is, one goes further by contemplating that of these stellar masses there are trillions.

Still, all these stars, planets, comets, gas and other floating materials in the universe comprise only 4.9% of its totality, ¾ of the universe being dark energy (human comprehension largely pending), and the rest dark matter. Finally, black holes are so dense that even light cannot escape them, which is why we fail to see them since we only perceive objects as photons get reflected from them. A black hole escape velocity is greater than the speed of light; therefore even light gets trapped inside once it reaches the event horizon (the point of no return). Maybe with a telescope from Naturaliste à Québec, the next black hole will be discovered from the province…