Coast Guard of Ficheries and Oceans

Coast Guard of Ficheries and Oceans

Costal aids at a glance

Some of the services provided by Fisheries and Oceans Canada have been in existence for two centuries at the Port of Quebec. Trinity House of Quebec was founded in 1805 mainly to improve navigation between Quebec City and Montreal, This was the genesis of the Canadian Coast Guard, so named in 1962.

Prior to Confederation, fisheries management in Canada fell to the Department of Crown Lands. The Department of Marine and Fisheries was born in 1867. For a long time, its offices were in the Customs Building of Quebec City.

Between 1884 and 1930, various reorganizations split, recombined and again separated Marine and Fisheries services. In 1936, Marine was assigned to the new Department of Transport, while Fisheries came successively under the departments of Fisheries and Forests (1968), then Environment (1971).

Fisheries and Oceans Canada’s main programs are Fisheries Management; the Canadian Coast Guard ; Science ; Oceans and Environment. The latter two are now housed at the Maurice Lamontagne Institute in Mont-Joli.

Jean-Paul Godin was born in Quebec City, wher he earned his degree in civil engineering from Laval University in 1949. He joined the Department of Transport in 1951, eventually becoming District Engineer en 1962. Mr. Godin was particularly instrumental in bringing about improvements to essential navigational aids in the St. Lawrence River and Hudson Strait, developing the Arctic Sealift Program and organizing escorts for merchant ships travelling through icecovered waters. He co-ordinated and supervised engineering projects that ensured safe navigation.

Mr. Godin served as Regional Director, Marine Services, Laurentian Region (today called the Quebec Region) from the day it was created, April 4, 1972, until he retired on July 1, 1985. His leadership, initiative, ingenuity and enthusiasm were the basis for and the driving force behind the establishment of the Canadian Coast Guard in Quebec City.

Commercial lateral buoy. This buoy dating from early in the 20th century was used mainly to mark the shipping channel of the St. Lawrence for merchant vessels. It could hold a cast-iron bell acting as an audible warning signal. Height: 6m; diameter: 2.9 m; weight: 4,900 kg. Photo : ProvinceQuebec.com 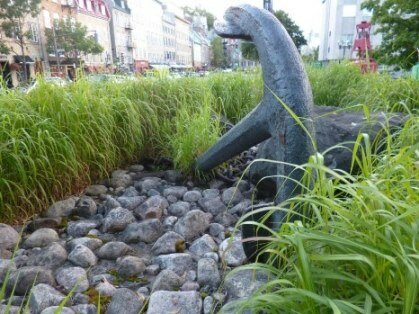 Anchor in face of the building of Coast Gard: This wrought-iron anchor bears an inscription that appears to read Peelingagile, doubtless the name of the vessel to which is belonged. Its date and origin remain unknown however. Photo : ProvinceQuebec.com