The Acadia Apartments were built in 1925 on the site of the 19th century residence of the Orr Lewis family. The 12-storey apartment building was the first on Sherbrooke Street to take advantage of a new municipal by-law that allowed buildings to exceed 10 stories. Metropole Apartments, the developers, followed the standards and style of apartment houses built in New York City at that time.

After its extension west from Aylmer Street to Côte-des-Neige in the 1840s, Sherbrooke Street grew into an elegant tree-lined avenue of public buildings and private residences, built by many of the central figures in Canada’s industrial and financial development. It bisected the splendid area from the escarpment above Saint Antoine Street to the slopes of Mount Royal that became known as the Square Mile.

Montreal architect David Robertson Brown designed the Acadia Apartments to have a simple and sparingly ornamented façade, reserving most of the architectural detailing and the finest materials for the public spaces and the well-appointed interiors of the 56 apartment suites.

The sober brick exterior is enlivened by ornamental bands of cast. Benedict stone and filigreed wrought iron balcony grilles. A handsome entrance canopy and fence bordering the Jawn complement the restrained elegance of the building.

Time, demolition and new constructions have changes Sherbrooke Street considerably, but the buildings which have survived bear eloquent testimony to its glorious past. A walking tour along the street would celebrate a remarkable legacy. 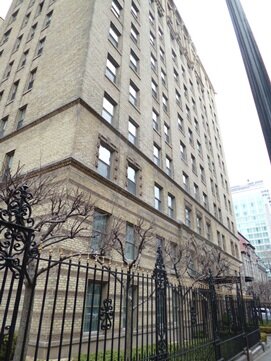