For the first years, Montrealers devoted themselves to community building, clearing the land and planting crops around their first fort. There was urgency to ensuring the soil would yield abundant crop.

Indeed, the inhabitants had dozens of mouth to feed. Besides, they had a stated objective of using agriculture as an inducement to keep the Amerindians at the fort. French wheat gradually supplanted fields of Indian corn and peas.

In 1645, Jeanne Mance, a co-founder of Montreal, founded the Hotel-Dieu, the first hospital of the town. It was favourably located on an extensive plot of land on the other side of the Little River, not far from the present-day Place Royale.

The hospital soon became the centre of Montreal. Around 1647, Paul de Maisonneuve received permission from the Society of Notre-Dame, the owner of the island of Montreal, to grant land to settlers who had been established there for three years or more.

The very first concession was made to Pierre Gadoys, in 1648, near the present-day D’Youville Place in the downtown. Actually, all the lots of the first colonists were located between present-day McGill Street and Saint-Francois-Xavier Street where the terrain was flatter and better suited for farming.

However, the town developed around the Hotel-Dieu, transformed into a small fort with bastions and palisade. So the urban development of Montreal took place around the complex in part for security reasons. Outlying farms and mills were reinforced to serve as redoubts, because the Iroquois menace persisted.

This menace became particularly acute following the destruction of Huronia by their enemies, in 1649. In addition, the harvests were bad and the municipal reserves were empty.

At the end of the 40ies, many thought Montreal wouldn’t survive the next ten years. 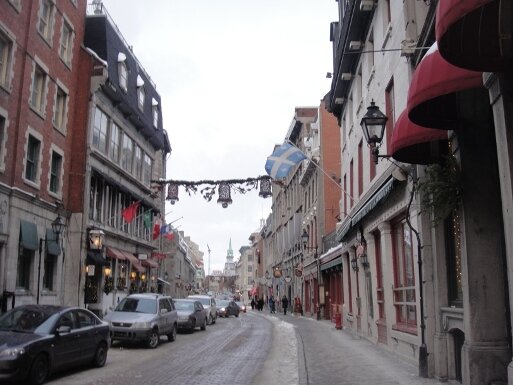